Today’s title is lifted from the “Tears in rain” speech made by Rutger Hauer’s character, Roy Batty, in Ridley Scott’s 1982 masterpiece, Blade Runner. We moved from Kyoto to Osaka on Saturday so we’re having a Saturday night in the city that inspired much of the set design for that movie. It was also the setting for Scott’s later (underrated) Black Rain.

Before we get to the neon glitz and 3D animated restaurant signs, we first had to manage the journey. When we arrived in Kyoto, we took a taxi from the main station to our ryokan but, after two days of eating nothing but Japanese food, I felt prepared to meet any challenge the transport system may have for us. After breakfast, we packed up and checked out. We then walked down to the nearest subway station. I have been very impressed by the widespread availability of elevators in stations. They are very helpful when, between us, we have two suitcases, a dobro, a mandolin, a camera backpack, a handbag and a man-bag. The lift helped ease us down to the right platform for a subway to Kyoto train station.

Once there, we decided that we would take a local train that would take us direct to Osaka station. Our pass entitled us to take the bullet train, which is faster, but it stops at a station called Shin-Osaka where we would have to change to get to Osaka so we decided the convenience was worth the slower journey. We got to Osaka at around 11:30 and we were booked at an AirBnB where we couldn’t check in until 3:00pm. Luckily, all Japanese stations are equipped with a vast array of luggage lockers and a left luggage counter, so we were able to store all of our bags and start being tourists immediately.

Well, immediately after a cup of English Breakfast tea, which wasn’t available at the ryokan so we were going a bit cold turkey for a proper cuppa. Over our tea, we looked at what was available for us to go and visit, and settled on the Osaka Museum of Housing and Living. This was a short subway ride away and, once again, our Pasmo cards worked seamlessly on the Osaka urban transport system. 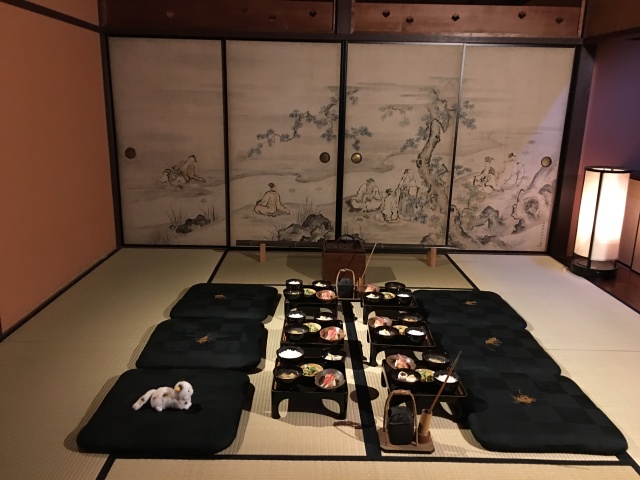 The museum itself featured scale models of Osaka showing its growth over the centuries. It also had a full scale reproduction of some city streets that we could walk through and learn a little more about Japanese life in the mid-19th century. It’s not a huge museum but well worth a visit if you have an hour or two to kill in Osaka. After the museum, we went for a stroll down a covered market street. I was impressed by the effort that went in to this particular drain cover:

We’ve since seen a few more cast in the same way but this is the only one so far that’s been painted. This street also gave me the opportunity to try another typical Japanese activity: Pachinko. The aim of the game is to fire little silver balls into a hole. I played for about 15 minutes and still have no idea how it works. I see no need to attempt a repeat experience.

It was time to head to our AirBnB which is a short walk away from Fukushima station on the JR Osaka Loop Line. Because it’s a JR line, we were able to travel for free with our rail passes. The flat is best described as compact, but that is what we were expecting from Japan so it didn’t come as a shock. After settling in and buying some of life’s necessities (tea bags and milk), we decided to head out for dinner. I was keen on some comfort food, so we found a little Italian place just around the corner from the flat. It had a Google Rating of 4.5 from 148 reviews, which is pretty decent for that number of reviews. We arrived at 5:20pm, and there was already a line of people waiting to get in when it opened at 5:30. 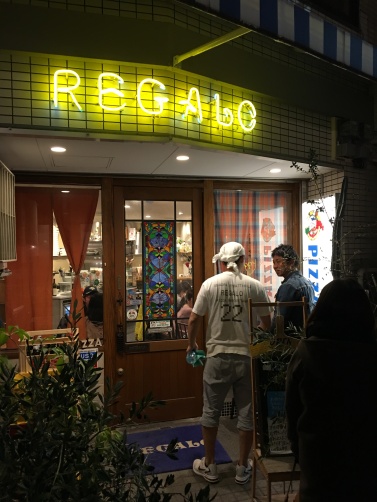 The pizza was amazing. The patron/chef/waiter is a one man whirlwind. There is no other staff. You order your pizza from him at the counter. You tell him what you want to drink, then you help yourself to the drink and open it yourself. Regalo is highly recommended if you find yourself in Osaka in need of a pizza.

After dinner, we really had to pay a visit to Dotonbori, the canal-side area famous for its neon signs, animated large scale food reproductions and vast quantity of restaurants. 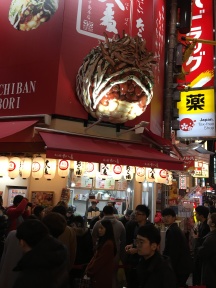 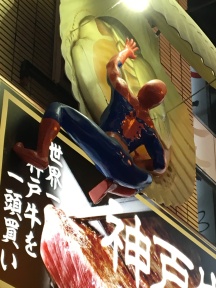 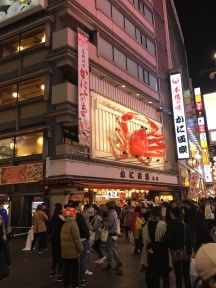 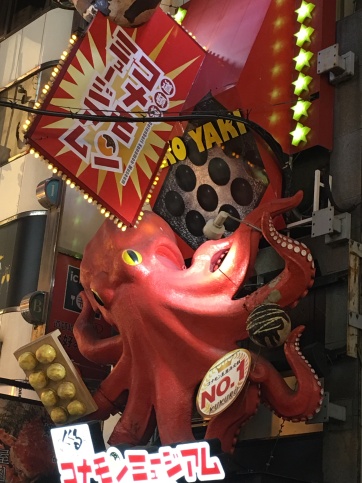 There is a remarkable Japanese word, Kuidaore, meaning to ruin oneself by extravagance in food. It seems to have been coined for Dotonbori.

The most famous sign of all in this area is the Glico running man, which has been a Dotonbori icon for over 80 years.

After taking this shot, we strolled along the main drag and, at one point, we were stopped by a young Australian lady who asked if we had seen the running man. She had somehow missed it and needed directions which we were able to provide.

I’m amazed by how completely different a feel there has been to each of the Japanese cities we’ve visited so far. I’ve discovered, however, that the Japanese themselves perceive residents of each city to have differing vices. As mentioned above, it’s food here in Osaka. In Kyoto, it’s clothing – specifically kimonos. And in Tokyo? Footwear apparently. They love a shoe over there.