On Monday, we headed into Brisbane, using the convenient train service that runs between the city and the Gold Coast.  We got off at South Bank station and took the free ferry across the river to take a look at the downtown area. As we disembarked, the first building we encountered was the Treasury Casino. Unsurprisingly, it’s based in Brisbane’s old Treasury building. 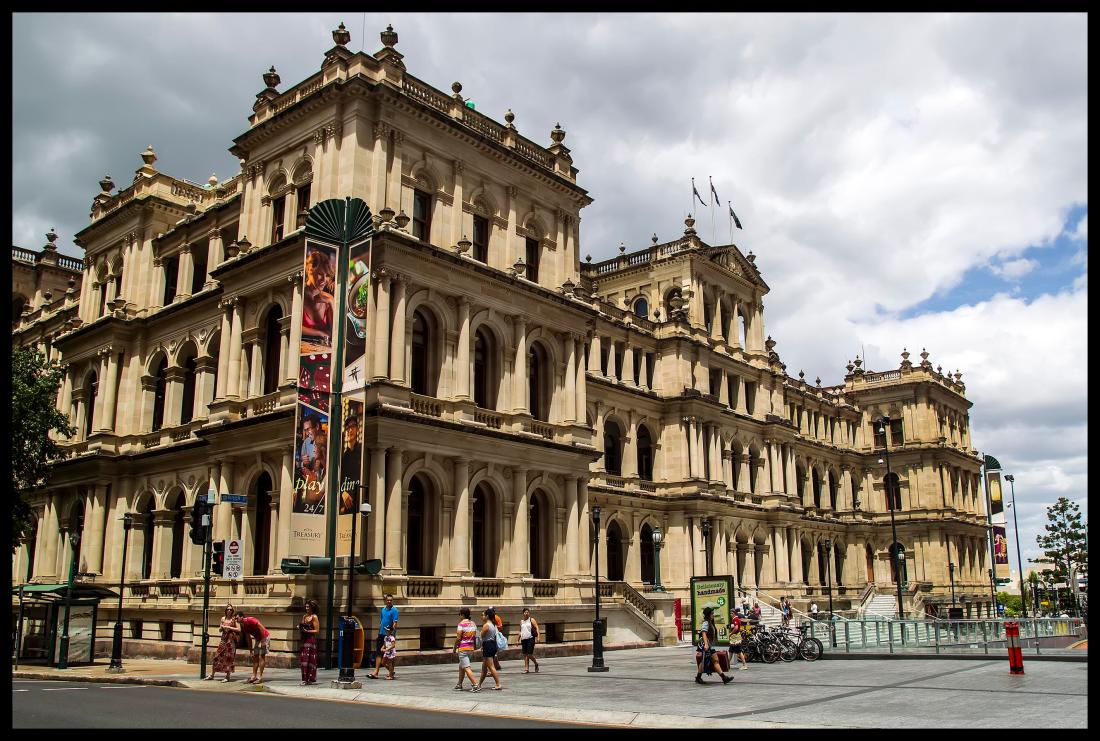 It’s a great building and the interior retains a lot of original features. We investigated their poker room but they only run cash games – no tournaments. We left the casino and wandered on into the main shopping area where we found the Tourist Information centre housed in a 1929 cinema building. 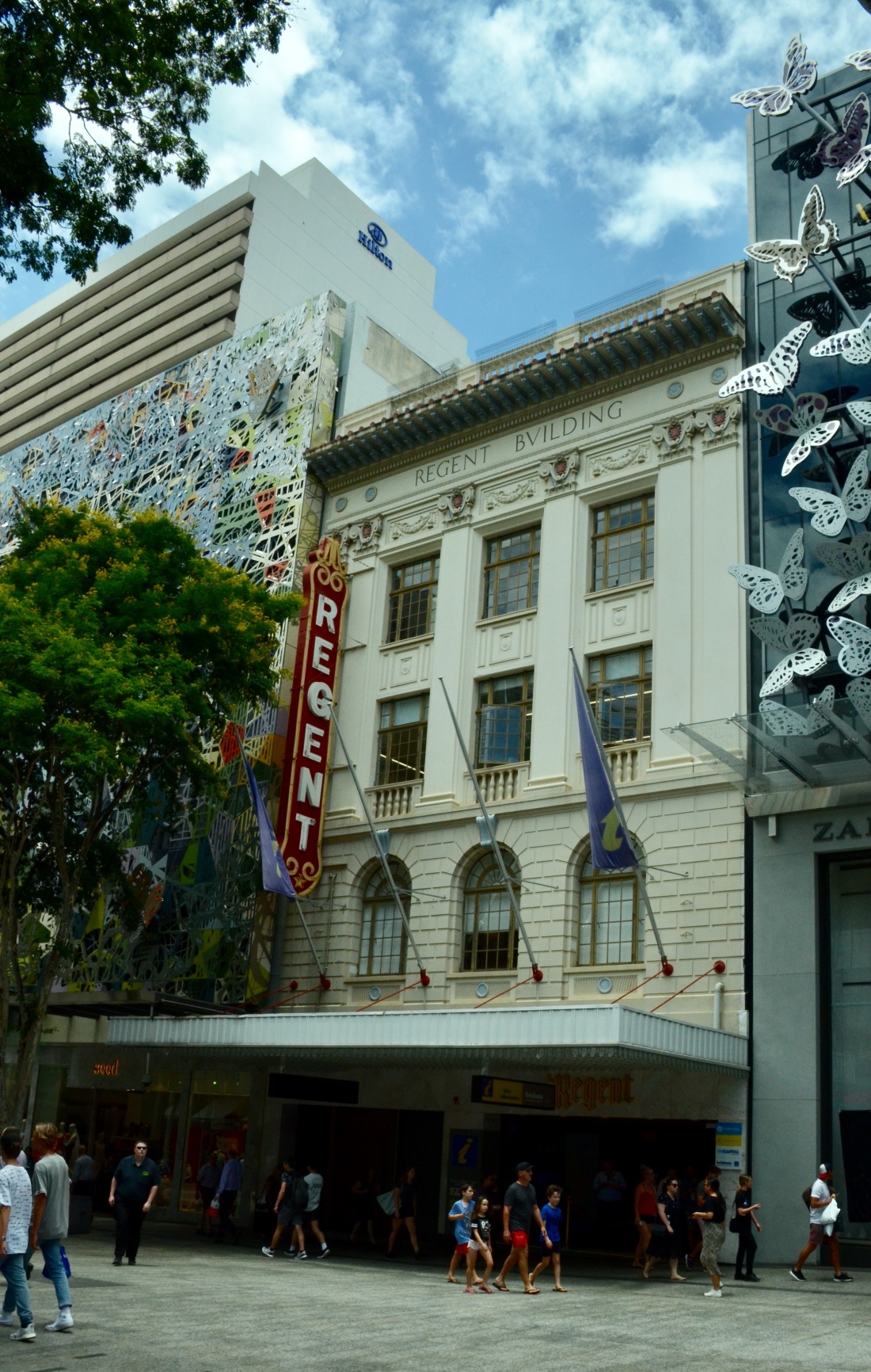 We were interested in visiting Mount Coot-tha which has a renowned aspect over Brisbane. Obviously, this is a question that is asked of them fairly often since they immediately produced a bus timetable for getting there and back, together with a map for finding the relevant bus stop. We had acquired tap and go cards for the train in to town and they worked on the buses too so we made our way round to the bus stop at the appropriate time and headed up to the mountain. The views from the peak are excellent. 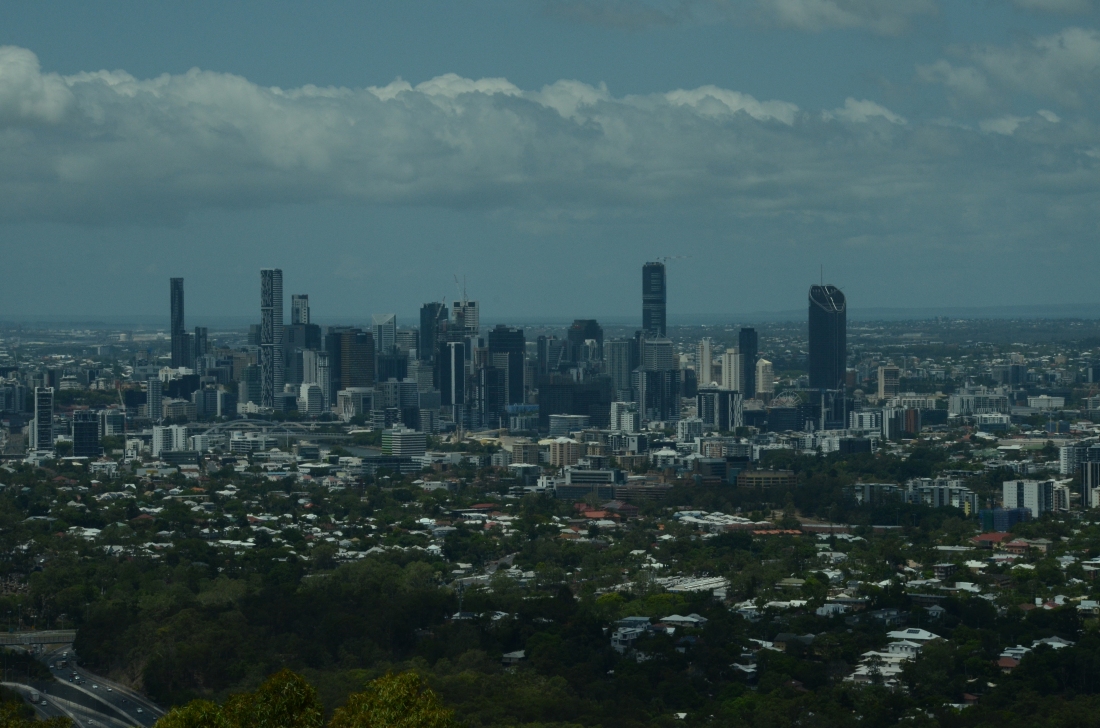 It had been far too hot to even think about walking up to the peak but since the bus had stopped at the Botanic Gardens en route to the top, we decided we would walk back down and start our return journey to the city from there. It was pleasantly shady most of the way down but we were nevertheless grateful for the occasional breeze that wafted over us during the descent. We were surprised to pass a mountain biker powering his way UP the slope in this heat, and maintaining quite a pace while doing so.

We reached the gardens and had a stroll through a small part of them. Judging from the map, they are very extensive and we were never going to be able to see a lot of them. We did have to spend some time avoiding the sprinklers that were operating in quite a number of areas but we made it down to the bus stop, which is just outside the Sir Thomas Brisbane Planetarium. 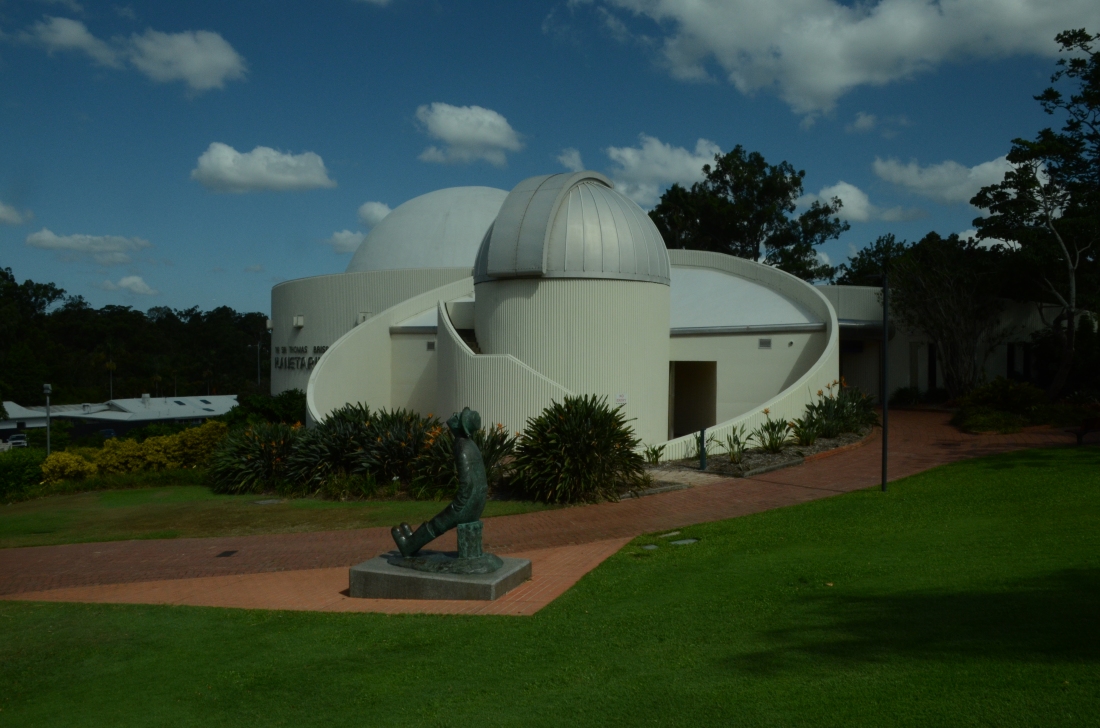 We caught our bus and headed back to town. Since we were by now on the cusp of Brisbane’s rush hour, we decided that we would have dinner in town and catch a later train back home. I also took advantage of the city by stopping in to the Electric Chair Barbershop to have a tidy up on the beard. I was by far the oldest person in the shop but enjoyed the robust discussion between one barber and his customer over the relative merits of Eminem vs Kanye.

After my tidy up, we had dinner in a pub/restaurant called Buffalo. Coming from the UK, it’s always a surprise to see children in the main bar area of a licensed establishment. This evening, it looked like a number of different families had arranged to meet up for a meal so there were about a dozen kids arranged along a set of high tables while their parents sat at a separate set of tables. Luckily we got our dinner order in before the kitchen was overwhelmed by them.

After dinner, we headed across to Brisbane’s Central Station for our return train journey. Still no sign of the rain that everyone here is hoping for.

It’s been a week since I put up a post, apart from the impressions of Japan, so I haven’t yet touched on the Australian leg of our journey. In time-honoured fashion, and like so many UK visitors before us, we are spending a lot of our Australia visit imposing ourselves on friends and relations.

We arrived at Brisbane airport early on the morning of Friday, 18th January and were picked up by Ishbel’s sister. She lives on the Gold Coast and, showing kindness above and beyond familial duty, had agreed to put us up for a couple of weeks. We’ve been changing accommodation every few days for the past month and a half so it’s nice to get the chance to just settle down and properly unpack for a while.

We landed at around 6:30am and it was already blisteringly hot, and that has remained the case ever since. Quite a contrast from Japan’s Northern hemisphere winter. Friday was really a settling in day as we found our feet. There’s only a one hour time difference between Queensland and Japan so jet lag wasn’t a problem. We were both pretty tired though because we did have an abbreviated night’s sleep on the plane. There’s a pool at the house so we have been able to enjoy a refreshing dip whenever the heat gets too oppressive.

Saturday was a family gathering day as our three Australian nephews and three Australian great-nephews came round for, of course, a barbie. We’ve visited here a couple of times before and they have come to the UK as well so, like all long-distance families, we have seen them grow up in episodic fashion. The nephews are now all grown men and it’s lovely seeing the next generation of kids as they interact with us. They’ve met us before but, of course, we’re strangers for a couple of days until they get comfortable with accepting us as family.

The other acceptance process that we need to go through is with the dogs that live in the house. There are four of them: 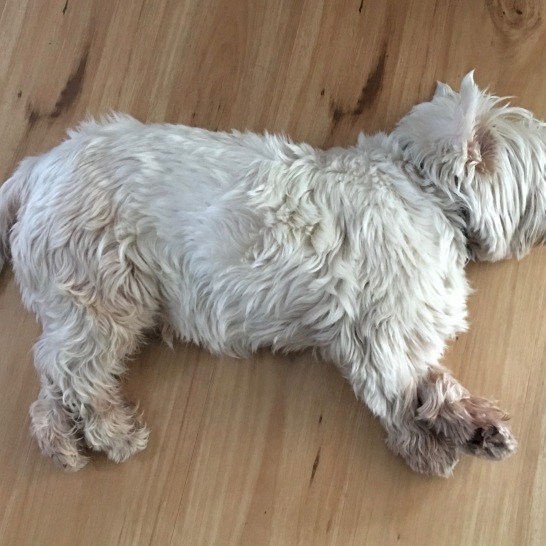 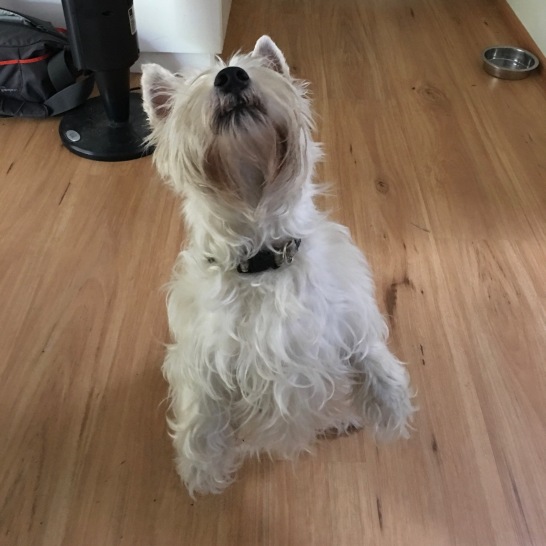 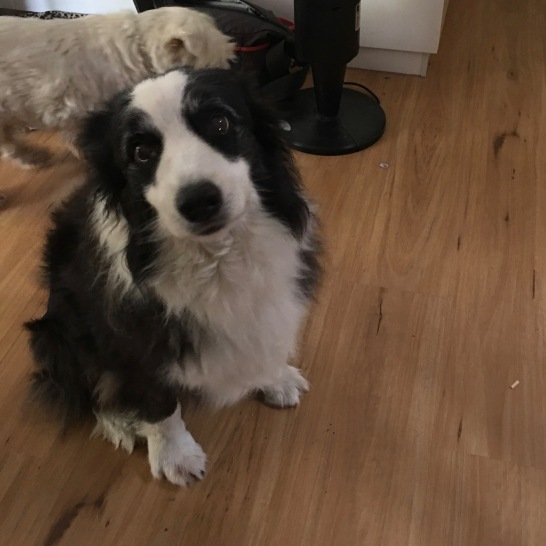 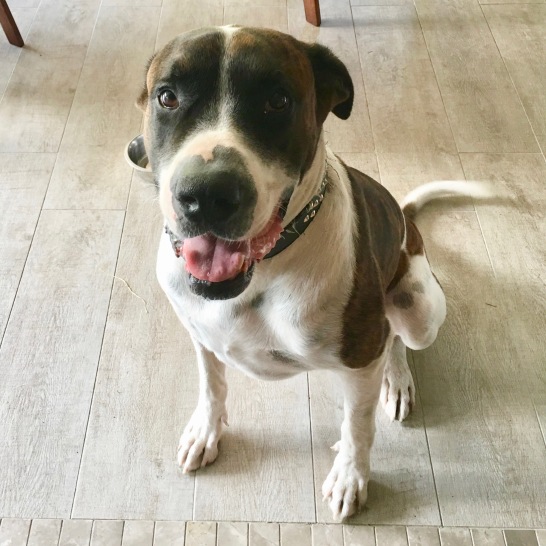 Oscar and Spirit are West Highland Terriers; Diva a Border Collie; and Buddy is a horse. Well, he’s almost the size of a Shetland Pony but he’s a Wolfhound/Bull Mastiff cross. They all seem to have accepted us now.

On Sunday, we went along the coast a little. We had a specific task in mind as we had to buy Ishbel a new hat. Her Tilley hat appears to have parted company with us at some point before Japan. With the sunshine here on the Gold Coast, a hat is a necessity so we found a Tilley hat purveyor nearby and went to acquire a replacement.

That was our relaxing first couple of days in Australia.