After our Friday exploration of Macau’s rich pre- and post-colonial history, we decided we should take a look at the activity for which this place is most famous: gambling. We’ve been staying at the Hotel Lisboa which is in the heart of Macau’s oldest inhabited area but there’s more to the former Portuguese colony than just the peninsula. 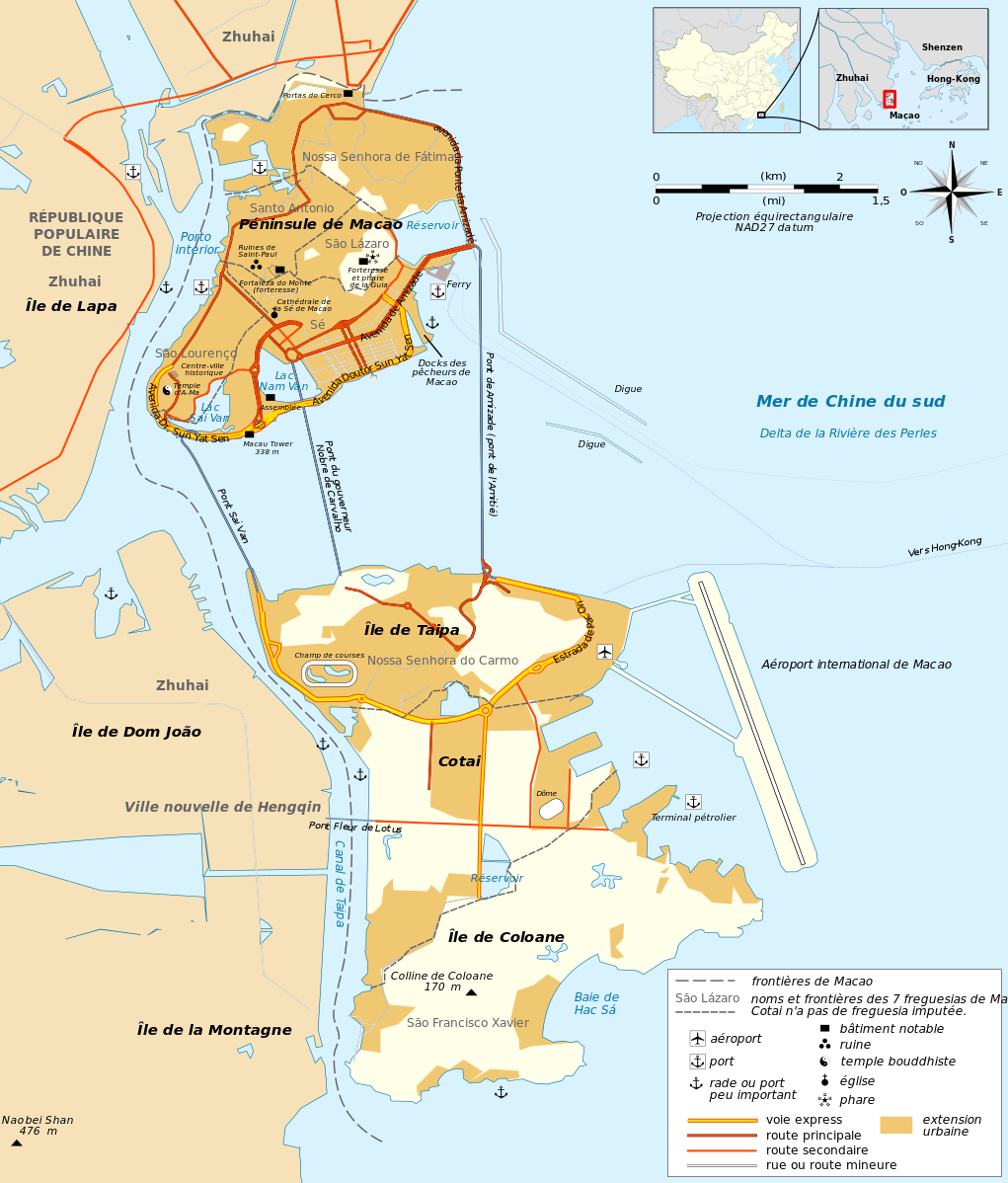 Across the water, there’s the old settlement of Taipa and the area where there appears to be a concerted attempt to reconstruct the Las Vegas Strip: Cotai. We think of ourselves now as experienced Vegas visitors so we decided to head over there and see what all the fuss was about. There are a number of free shuttle buses that run between casinos in the same family group, so we walked over to Wynn (which is built to look exactly the same as its Vegas namesake) and hopped on the bus to Wynn Palace in Cotai. 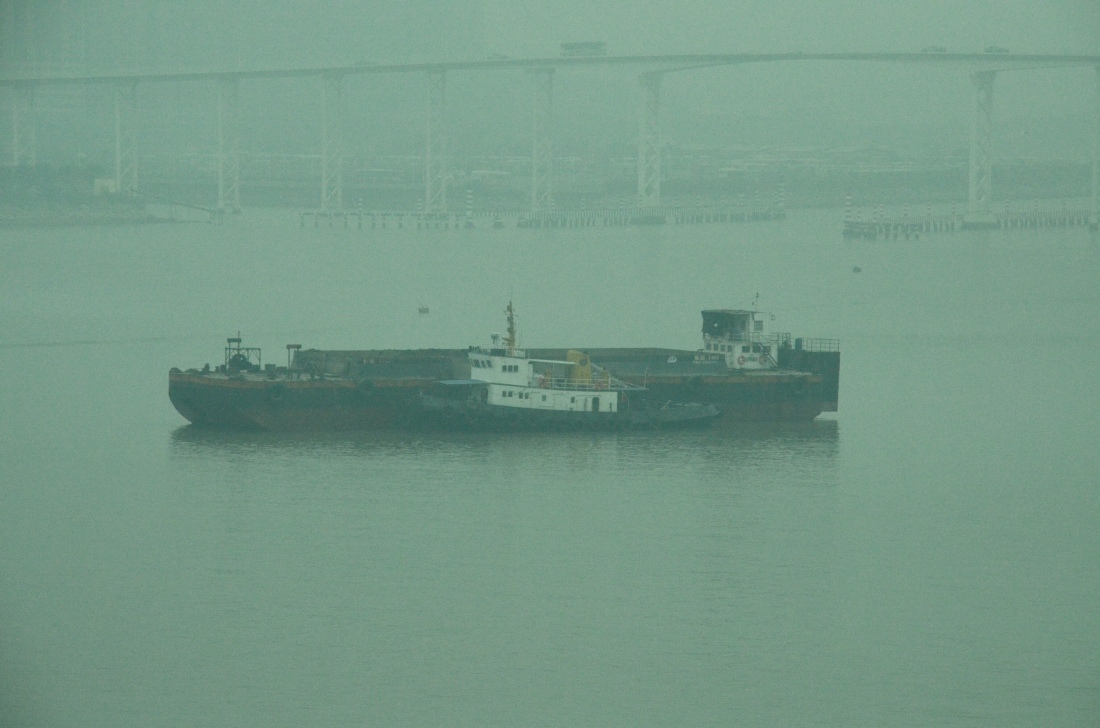 Ishbel’s hopes of spectacular shots of the Pearl River Delta from the bridge as we crossed were thwarted by a lingering humid haze. Arriving at the Wynn Palace, we spotted a cable car ride that went out over their (Bellagio-like) fountain show, so we took that to escape. To be fair, I rushed Ishbel on to it before she had time to think. Only when we were on the ride was she able to demonstrate her famously happy-go-lucky attitude to heights. 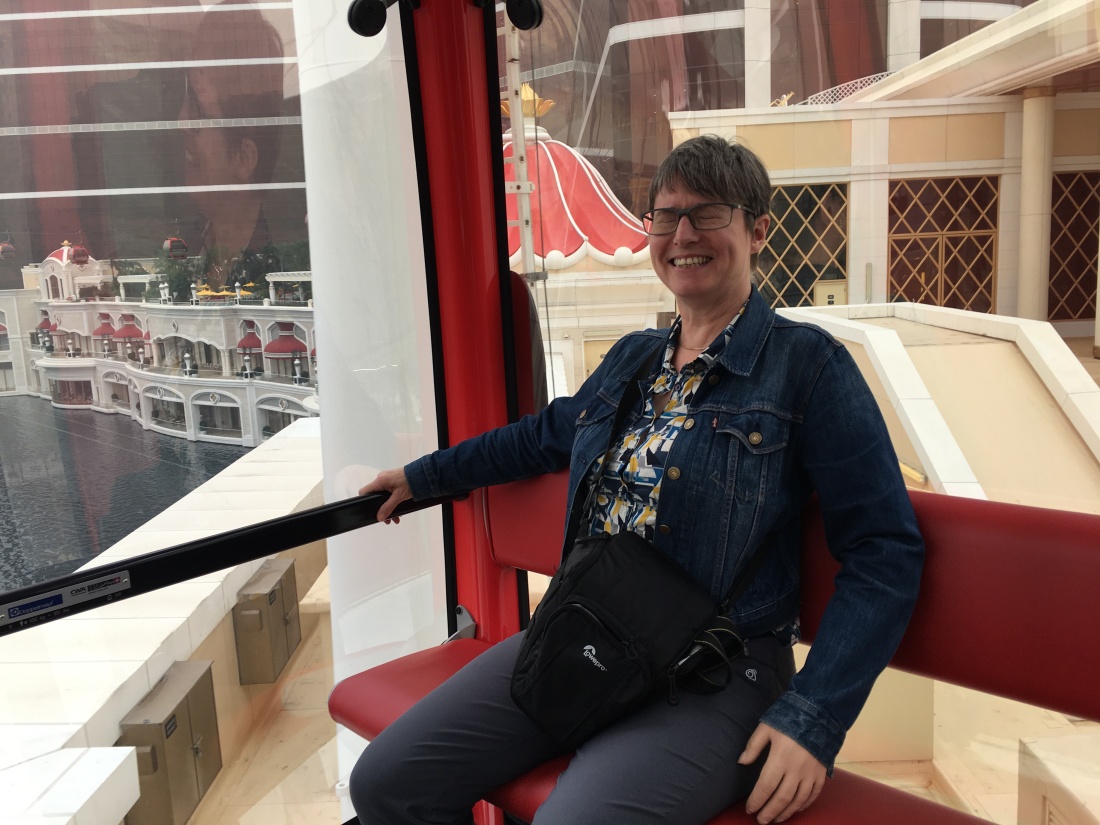 We walked from there to the Venetian which was remarkably similar to the Venetian in Vegas, neither of which bear much resemblance to Venice. Not nearly enough of a smell.

Old school Vegas visitors will tell you that the Strip isn’t real Vegas and that it lacks the life and vibrancy of old Vegas. Having now visited Cotai, I would say that they’ve managed to replicate the Strip but have sucked even more soul out of the experience. 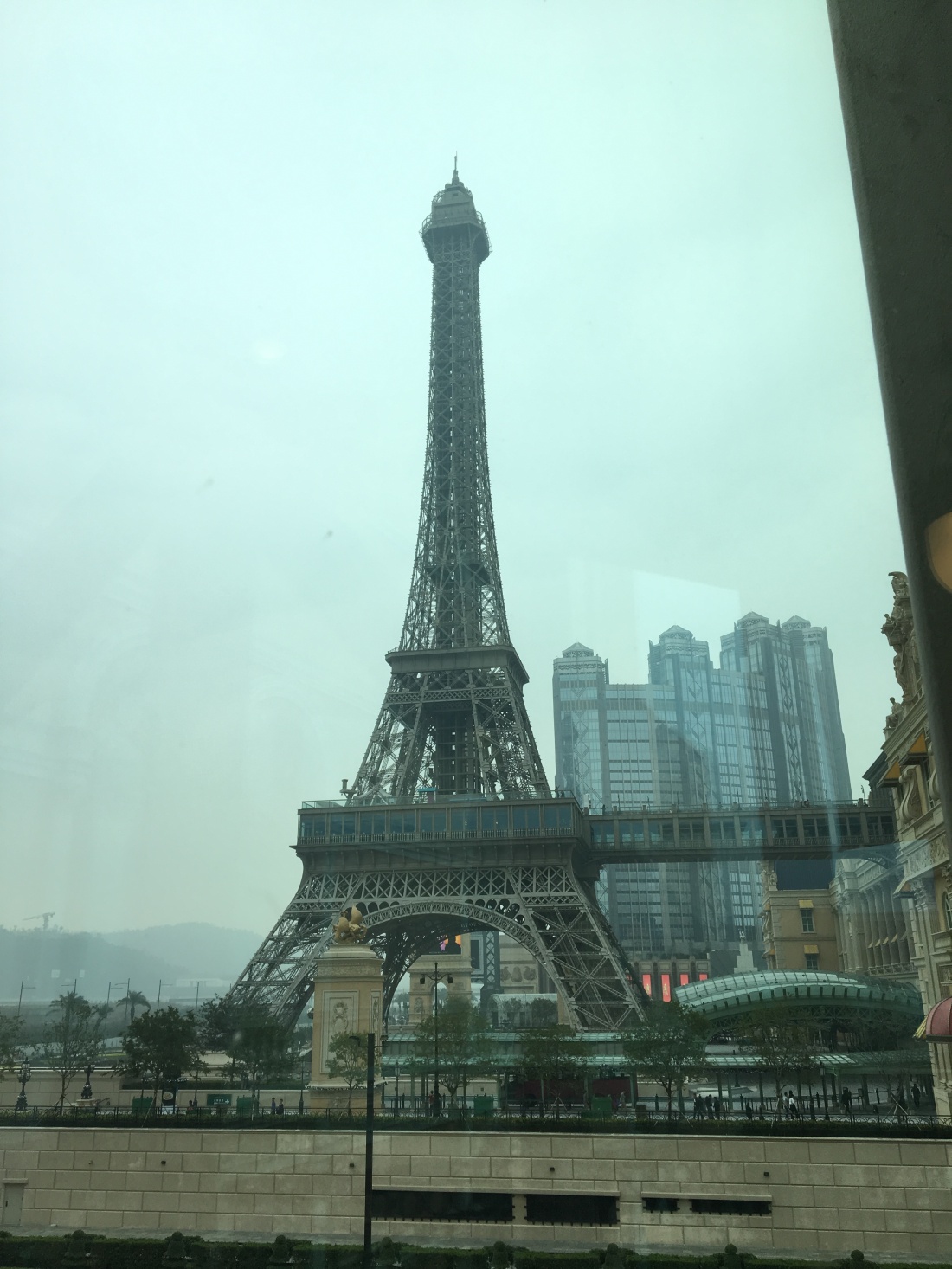 As we walked from the Venetian to the Parisian, Ishbel and I engaged in a lively debate about whether the Macau Eiffel Tower was bigger than the Vegas Eiffel Tower. It turns out they’re both roughly half the size of some kind of homage tower in Paris.

By this time, we’d had enough of dealing with these second or third generation pale imitations of what were in any case poor copies. We headed for the free shuttle bus from the Parisian back to the Sands. On arrival back in Macau peninsula, and since we were in the area anyway, we once again joined the queue for the custard tarts at Margaret’s Cafe e Nata. 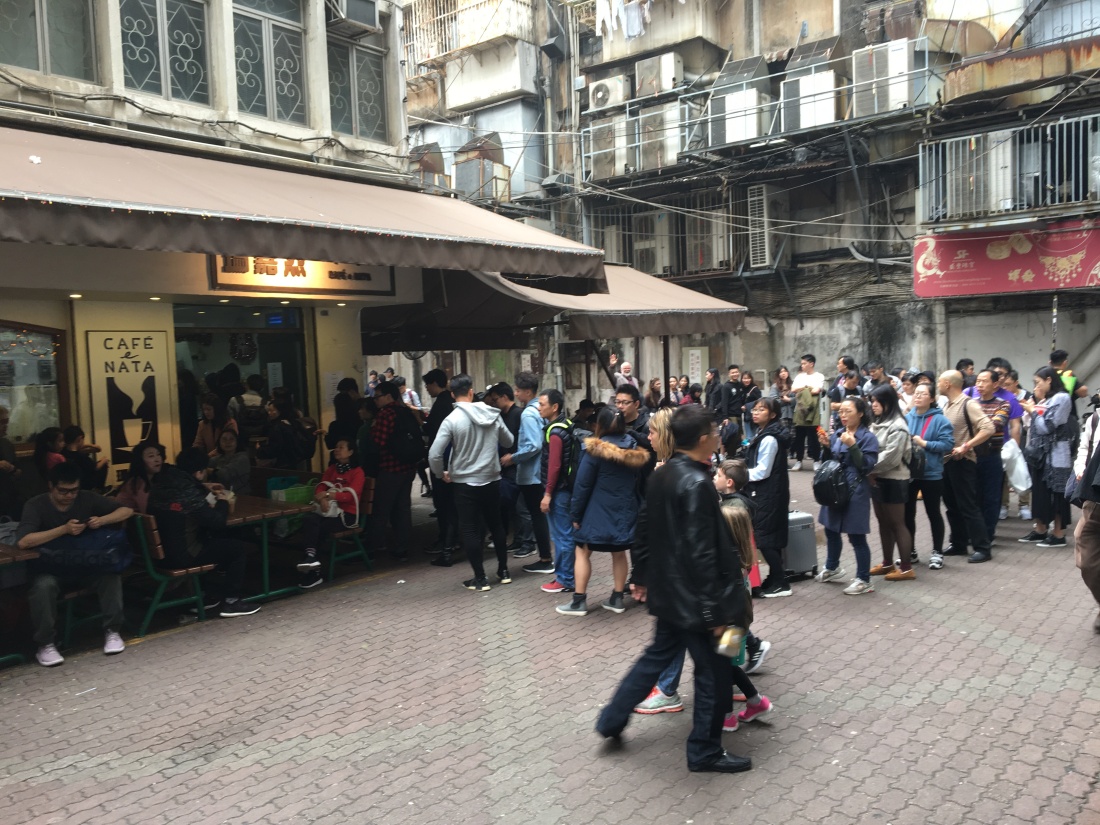 Close inspection of this photo will reveal two things: one is my (relatively) towering presence at the back of the ridiculously long line; the other is the astoundingly cavalier attitude of Macau residents to electrical wiring, and cable management generally. So much so that it merited a close-up. 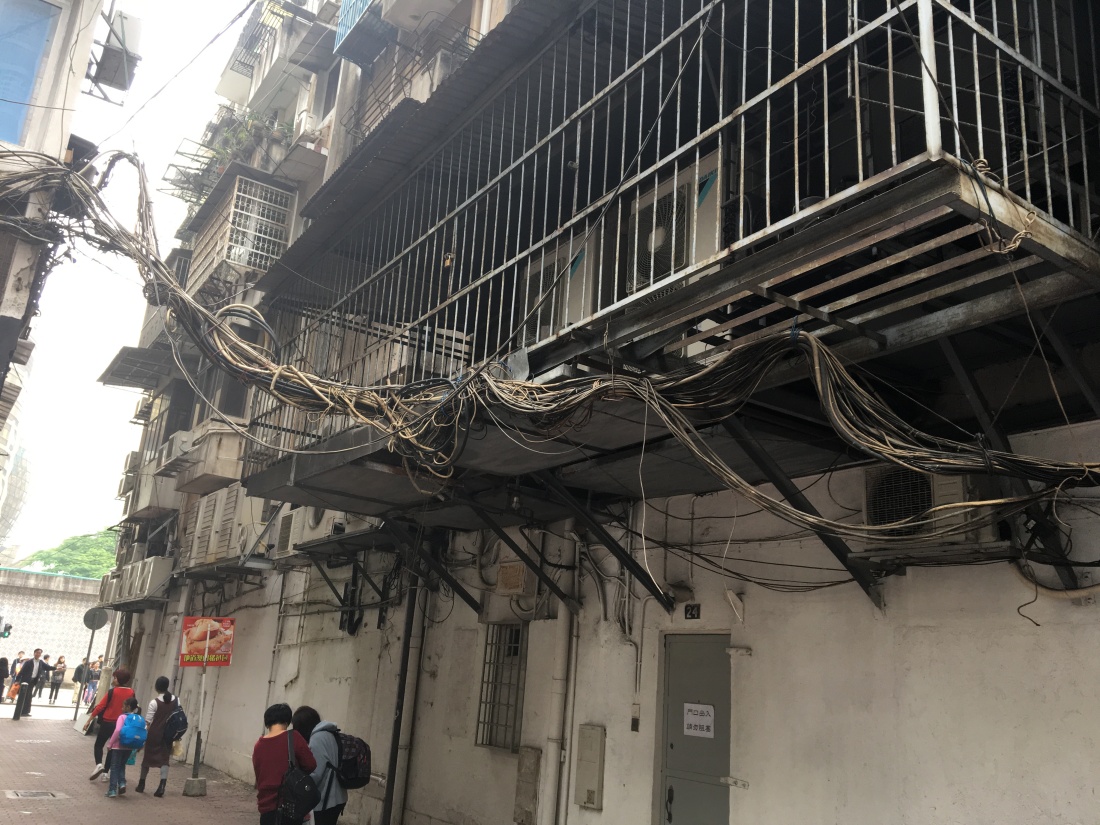 In the evening we picked up our laundry, which we had dropped off on our first day here, and had a relatively sedate meal in one of the small hotel restaurants. We have necessarily become much more adept in our use of chopsticks on this journey than at any other time during our lives. It’s amazing what a little practise can do.

We leave from Hong Kong for Tokyo on Monday and had decided that we would stay near the airport on Sunday evening. We had hoped to be able to take the new bridge from Macau to HK, but there’s no way of doing that without transiting through China. We’ve already used up our single-entry China visa, so the bridge is a non-starter for us. We’ll be taking the ferry to Hong Kong tomorrow before our Japanese adventure starts on Monday.