We are having a flying visit to Kyoto. We decided to spend two nights in each of Kyoto, Osaka and Hiroshima so we’re moving to Osaka on Saturday. This makes Friday our last night in Kyoto and our only full day there. We investigated the tourist sights and discovered that not only was Kyoto Imperial Palace open to the general public, but there was a free English language guided tour every day at 10:00am and 2:00pm. We had already booked breakfast in the Ryokan for 8:00am, so we were awake in plenty of time to make the early tour.

And after my Japanese food adventure of Thursday night, I was looking forward(?) to my first ever Japanese breakfast. 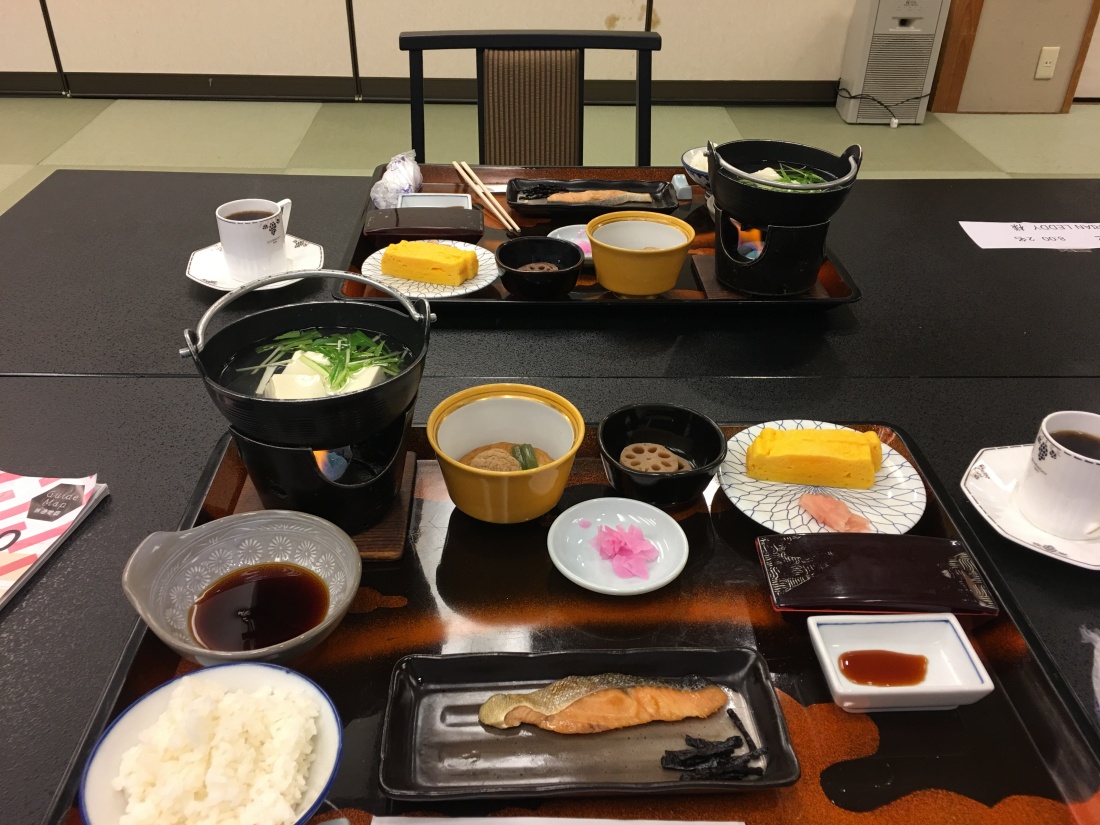 You can imagine how excited I was to see the big lump of cured fish right in front of me, plus the spirit burner cooking the tofu in the top left corner of my tray. I surprised myself with how much of this little lot I managed to eat. I really am a man of simple tastes but, on the other hand, when faced with the choice of eating what’s there or going hungry I will avoid peckishness.

Enough of the food chat. After the necessary sustenance, we were off on the subway to the Imperial Palace. Bless our little Tokyo Pasmo cards. It would appear that Japan has a system so integrated that the automated subway cards for one city are also valid in multiple other cities. What kind of mind-boggling technology must they have adopted to be able to achieve a level of transport integration that countries like the UK can only not give a damn about implementing? Rant over. Off we went to the palace and got ourselves in place for the tour. 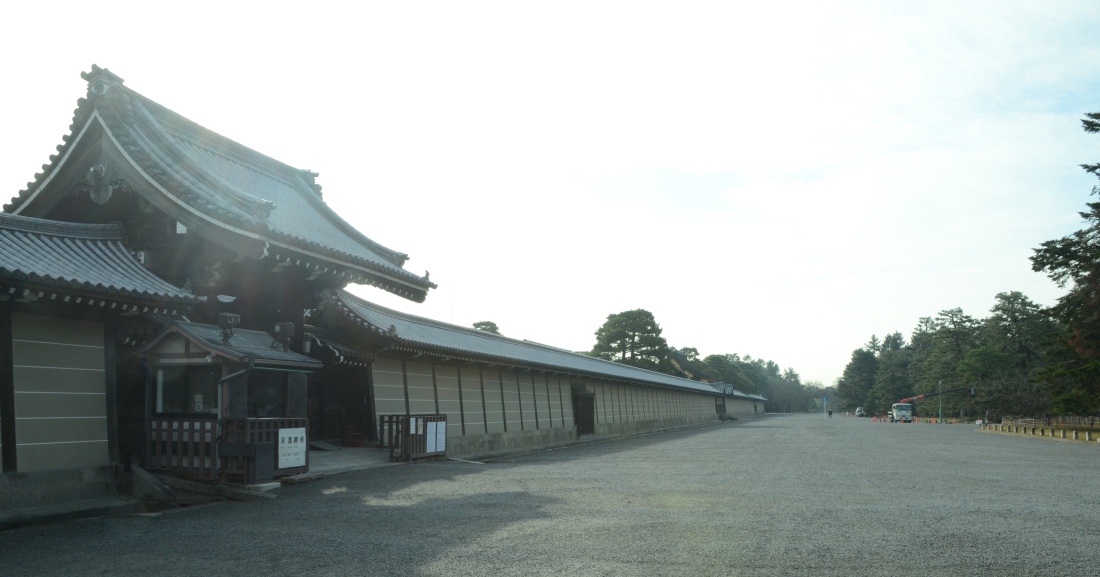 And it was wonderful. The Japanese lady who showed us round was hugely knowledgeable about the palace and grounds, and also about Japanese history more generally. I know I’m nothing but a tourist and have been here less than a week but I have learned more about Japan in that time than in my entire life to date. And it makes me eager to learn more. We heard about the enthronement ceremonies that took place in Kyoto until the enthronement of Yoshohito – subsequently Emperor Taisho – when Tokyo took over. We learned about the practice of an emperor being named posthumously after the era in which he ruled. And we learned about 16 petals on the chrysanthemum, which was formerly the number of petals reserved for the emperor but it is now the national symbol, which is why it appears on the front cover of all Japanese passports. All thoroughly fascinating stuff. 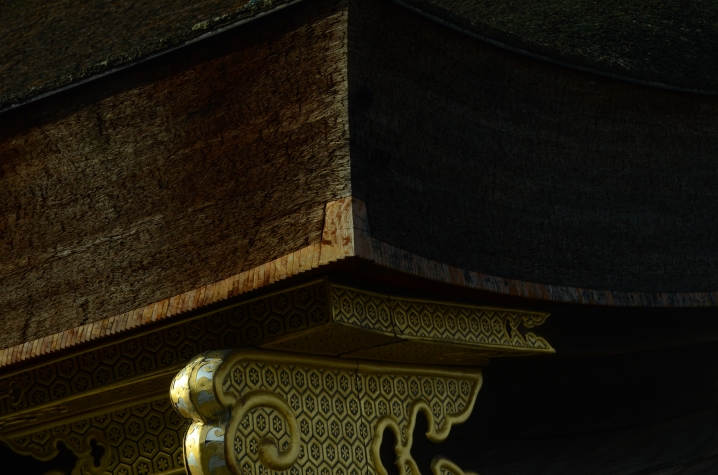 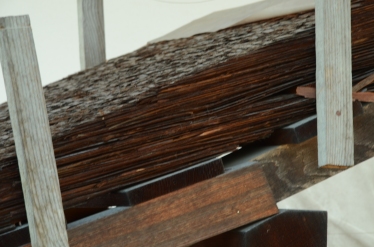 We were also given a whistle stop tour on the Japanese thatching process. Sacred buildings are thatched, not with reeds as we would expect in the UK, but with bark. Specifically, the bark of the Japanese cypress tree. Expert craftsmen peel the bark from the trees  and build it up in layers, compressing it as they go, before laying it on the roof. The more sacred the building, the thicker the bark thatch must be. It’s a highly skilled task to be able to peel the bark for the job. If done well, the bark regrows within seven years. If done badly, the tree dies. Unsurprisingly, craftsmen able to do this well are becoming more scarce and the cost of the work is increasing rapidly.

After the palace, we returned to the Ryokan as our afternoon plan was to visit a shrine and I needed to change into walking boots. Because this was not just any old shrine, but the Fushimi Inari shrine. Incidentally, I’ve learned another Japanese word. Kitsune means fox. And Inari is a deity who appears in the form of a fox. There are over three thousand Inari shrines in Japan, and Fushimi Inari is the Sohonsha, or head shrine. As such an important place, the shrine at the entrance is really crowded with people who come to pray. 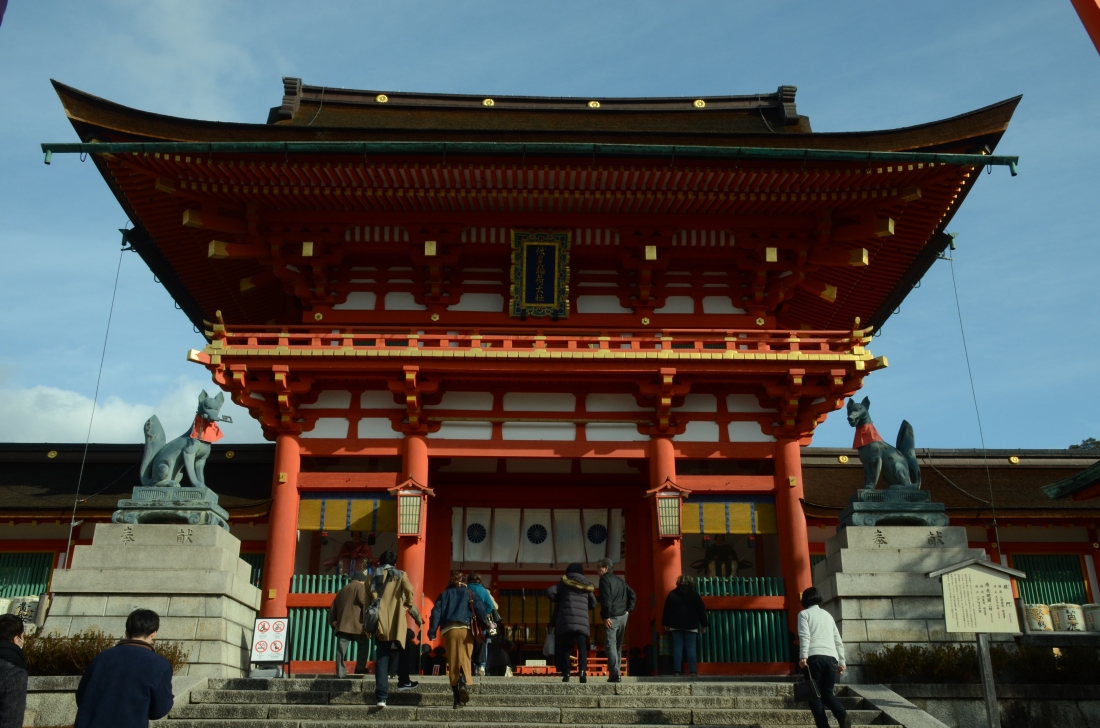 But this is also the place that made me think about my old desk on the 41st floor of One Canada Square in Canary Wharf. While working there we would be forced to undergo periodic fire drills, in which event all staff would be obliged to walk down 41 floors to assemble at our designated muster points. When I carry my personal bulk down 41 floors, I feel it in my knees for a day or two after and I swore I would never make the reverse journey and drag myself up those same 41 floors. Well, thanks to visiting not only the “base camp” shrine but also the equivalent at the top of Mt. Inari, my iPhone assures me that I did in fact climb the equivalent of those 41 floors. Twice.

And back down again, of course. The path to the shrine is a fascinating feat, not only of construction but of maintenance. The entrance to an Inari shrine is usually marked by a torii, or gate, painted in vermilion. But this is the head shrine, so one gate isn’t nearly enough.

The climb passes through what is effectively a corridor of torii.

But in a country as humid as Japan, wooden structures on this scale require constant monitoring and repair. Many of the columns have visible damage but there are regular reminders of the work being undertaken to maintain the pristine appearance of the walk to the top.

After the climb and descent, we were back on the subway and back to the ryokan. After stopping off for a quick beer because, frankly, we deserved it.

We once again enjoyed a typical Japanese dinner in our room and, once again, I was obliged to be adventurous or starve. Adventure won the day. We had both stayed in western garb for dinner, so decided to pop out afterwards for a stroll in our surroundings. The hotel is close to Nishiki market which is Kyoto’s traditional food market. It’s a covered street almost half a kilometre long where you can try and buy all sorts of Japanese delicacies. 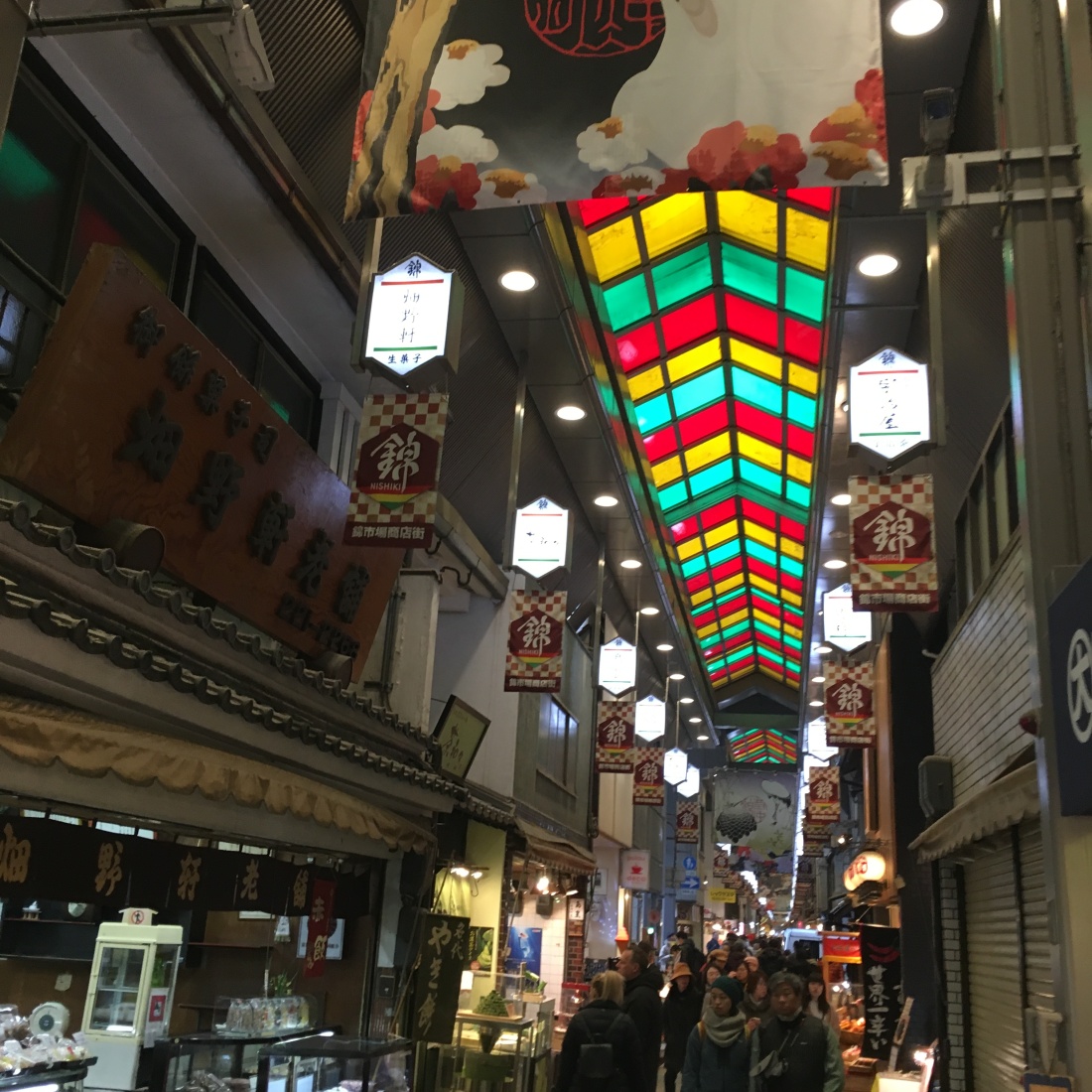 The one that appealed to me least was the octopus with quail’s egg, where the egg is stuffed into the head of the octopus so that it looked like…well…an octopus. We skipped Nishiki and, once again, enjoyed an hour in a karaoke room. This time, I destroyed classics by Sweet (Ballroom Blitz), Jesus and Mary Chain (Just Like Honey), Bobbie Gentry (Ballad of Billie Jo – 4 semitones lower than the original), and Ishbel channeled performances  by Blondie (The Tide is High), Rod Stewart (You’re in My Heart) and the Rolling Stones (Get Off of My Cloud).

We’ve decided we’ll be singing karaoke once in each Japanese city we visit. Watch out for the big hits from Osaka next!