Our flight to Tokyo leaves at 10:15 am on Monday so we decided to save ourselves some hassle by getting back to Hong Kong on the Sunday and booking in to an airport hotel. The best combination of rate and convenience was the Regal Airport Hotel, which is joined to Terminal 1 by a footbridge so would make for an easy journey on Monday morning. I booked it for around £130 – above our self-imposed nightly allowance of £100 but saving on early morning taxi transfer costs.

So it was that we said goodbye to Macau. We’re documenting the travels of Ishbel’s spangly guitar case for the nice people at Chapman Cases by getting a photo of it in every location. Usually it’s on its own but this time Ishbel was stuck with holding on to it while I took the picture. I love her rock star vibe in this. 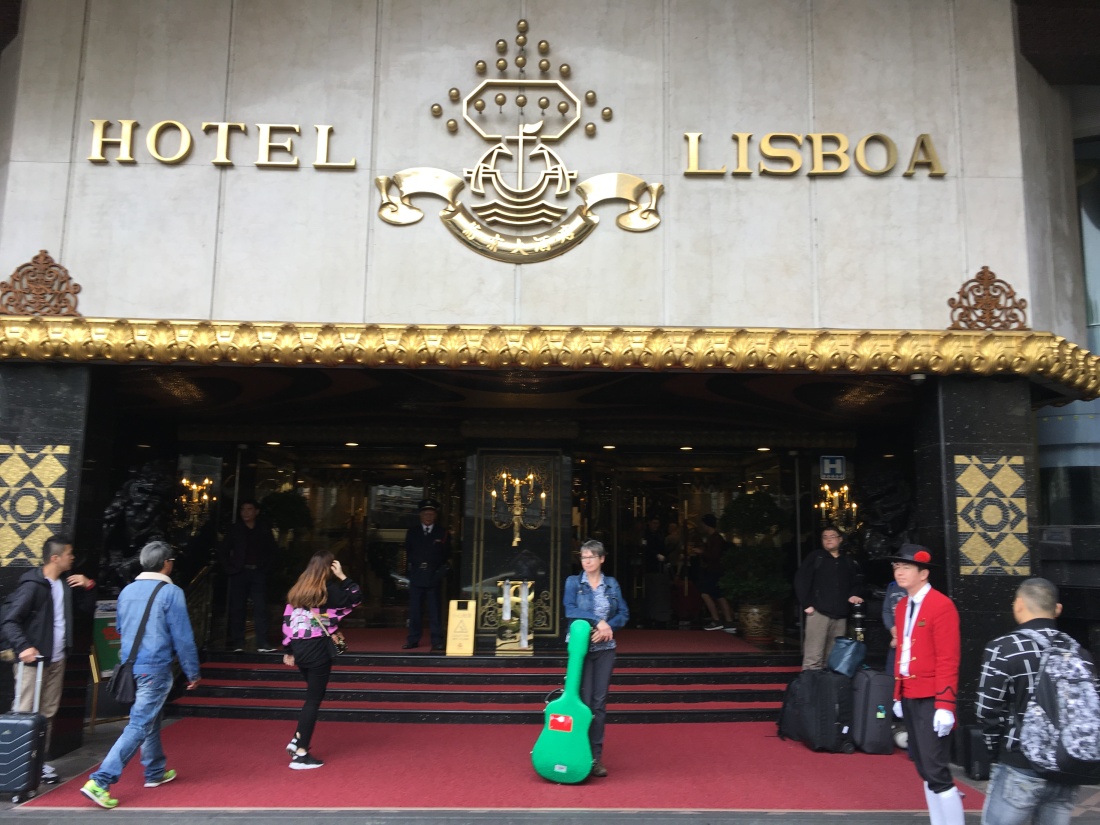 We were waiting at the hotel for the complimentary bus service to the ferry terminal to catch our transfer to Hong Kong. It duly arrived and we bought our tickets and checked the two suitcases and the guitar case. The mandolin and the camera case always travel as hand luggage no matter where we go.

The day was much clearer than Saturday so Ishbel was finally able to get a nice clear shot of the bridge between Macau and Cotai.

We took the ferry to Hong Kong Island rather than Kowloon because it was a much shorter walk with all our luggage to get to the nearest MTR station. It meant we had to make one change on our route, at Central, but there was a trolley available there which was very helpful. Especially as Ishbel had just accused me of getting grumpy as we hefted our luggage along seemingly eternal corridors. And it was true. I sensed myself getting – grumpy seems a little mild – psychotic?

All was well once the trolley was snared and we took the airport express train, having first topped up our Octopus cards with exactly the right amount needed for the fare. We arrived at the Regal hotel and recognised that it was enormous. And there was an enormous queue for check-in too. It’s obviously the place where airlines put passengers when they’ve had to cancel their flight until the next day. And it really is very handy for the airport, as you can see tell from our view.

We’d had enough of the hurly burly for the time being so we just had a burger and beer in one of the hotel restaurants then had an early night in anticipation of the next leg of the trip. Tokyo tomorrow.

One thought on “Back to Hong Kong for a night”