Today, we travelled from Tokyo to Kyoto. These cities are anagrams of each other, but it transpires that there’s a reason for this. Kyoto, the old capital of Japan, means Capital City. Tokyo was called Edo until the capital was moved there, at which point it was re-named “The capital in the East” or, in Japanese, Tokyo. Finding that out solved a little mystery for me so I thought I’d share it.

We chose today to start using our JR Rail Pass which will give us 7 days of travel on Japanese Rail lines. We bought the pass before leaving the UK and received a voucher which we had to exchange at a major station in Japan. For us, this meant Tokyo Station. We opted for the “Green Car” Pass which is the equivalent of First Class on UK trains. I paid the premium because I had read so many scare stories about the lack of luggage space in ordinary carriages of Japanese trains. To be fair, there’s not much luggage space in the green car either, but it was pretty quiet so we were able to get most things up in the overhead luggage rack and tucked the suitcases into the two seats behind us, which were empty all the way to Kyoto.

We travelled the 450km by bullet train, or Shinkansen. The pass doesn’t allow travel on the superfast non-stop express, but the Hikari service, which stops at a few stations en route, still covers the distance in a highly respectable 2hrs 40mins. Having spent the best part of 20 years commuting on the Brighton line into London, it was a delight to experience a railway being run properly.

We arrived in Kyoto on time and grabbed a taxi to the place where we were staying. I had booked a Ryokan, which is a traditional Japanese style of inn. You may be unaware (I certainly was) that Japan pretty much invented the concept of the hotel and the oldest Ryokans date back to the start of the 8th century. In the Ryokan, the floors of the rooms are covered in tatami mats. We remove our shoes at the door and step through a sliding door into our living space.

Another aspect of the inn is the availability of communal baths where guests can go and cleanse themselves. Ishbel and I both took advantage of this facility after arriving and it turned out that we were each the only people in our respective, gender segregated baths. Afterwards, we dressed in our Yukata – an indoor kimono type of robe. Once we were dressed in these, I changed back to western clothes. I realised that we would be required to sit cross legged on the floor to eat dinner, and the yukata barely covered my modesty when seated in a sedate western fashion. It would certainly result in overexposure if I were to wear it while dining.

I had taken the dinner, bed and breakfast option. As a highly unadventurous diner, this was quite a major step for me. Dinner was served in the room and I grew increasingly nervous as the meal arrived.

You may be able to spot here a considerable quantity of raw fish on the plate in front of Ishbel. Also, that thing in the sauce on the plate at the left of the picture is a fish head. Well, I ordered it so I had to live with the consequences. It turns out the fish head had quite a bit of fish meat on it and the sauce was quite delicious. Most of the raw fish was reasonably pleasant and the tempura was good. Surprisingly, I was able to eat enough so that I didn’t feel the need to sneak out for a burger later in the evening. Ishbel had no qualms about any of it of course.

After dinner, we rang for the trays to be removed. When the table was cleared, our bed was laid out. 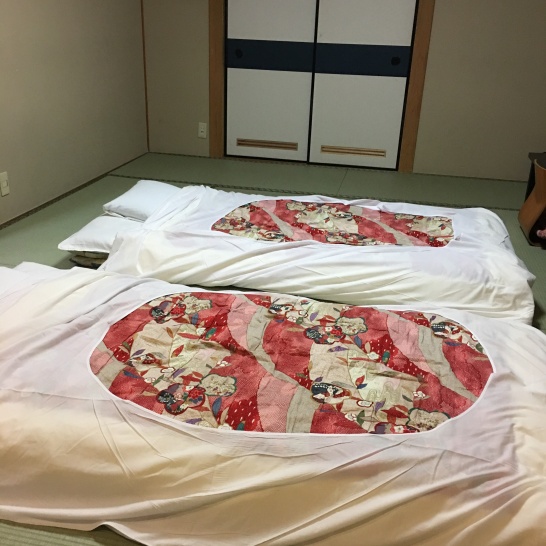 We both enjoyed a comfortable night on the triple layered futons. I’m starting to get the hang of this Japanese thing. Slightly. Let’s wait and see how breakfast goes.