On Monday, we continued our journey down the Crooked Road. The next town we had picked out to visit was Galax, VA. This was home to two of the nine major sites on the route: the Rex Theater and the Blue Ridge Music Center. There was also the chance of a jam at the town’s Stringbean Cafe, which was reputed to host regular Tuesday night jams but which Google had labelled as “Permanently Closed”.

We had booked a motel in Galax which was priced at $40 per night. This is an area that doesn’t get a lot of tourist traffic. The motel wasn’t luxurious, but it was perfectly adequate for our needs. It was only 41 miles from Floyd to Galax, so we took a Crooked Road detour, taking a brief look at Stuart and Hillsville on the way. It seems that either a lot of businesses close on Mondays in Virginia, or they celebrate Easter Monday in the US more now than they did 25 years ago when we lived here. Either way, there wasn’t a lot to do on the journey so we arrived in Galax around lunchtime.

We checked into our ridiculously cheap motel and headed out for a look at the town. We took a look at the Stringbean Cafe which was closed, but the closure didn’t look permanent. We carried on along the road and stopped in a music shop called Barr’s Fiddle Shop. Ishbel wanted some spare dobro strings and we asked the gentleman behind the counter what he had available. He told her that he actually puts together custom sets for the local dobro players because the find the high D string too light on the standard sets – a complaint Ishbel also had, so she bought a couple of sets from him. I still hadn’t had my mandolin setup that I was thinking of getting done in New York but where the wait would have been too long. I asked him how quickly I could get a mandolin setup. “It depends, but I could probably do it in a half hour.” I said I’d be back in the next day with the mandolin.

Our accent was a conversation starter here and we explained that we were following the Crooked Road and looking for jams along the way. We asked about the Stringbean Cafe, and it turns out that the jams in there are a summer thing and usually start in May. He recommended a Monday night jam in Sparta, North Carolina, which wasn’t far away. We decided we would check out the travel time and may go along to that one.

We strolled around town a little more and encountered the Rex Theater. 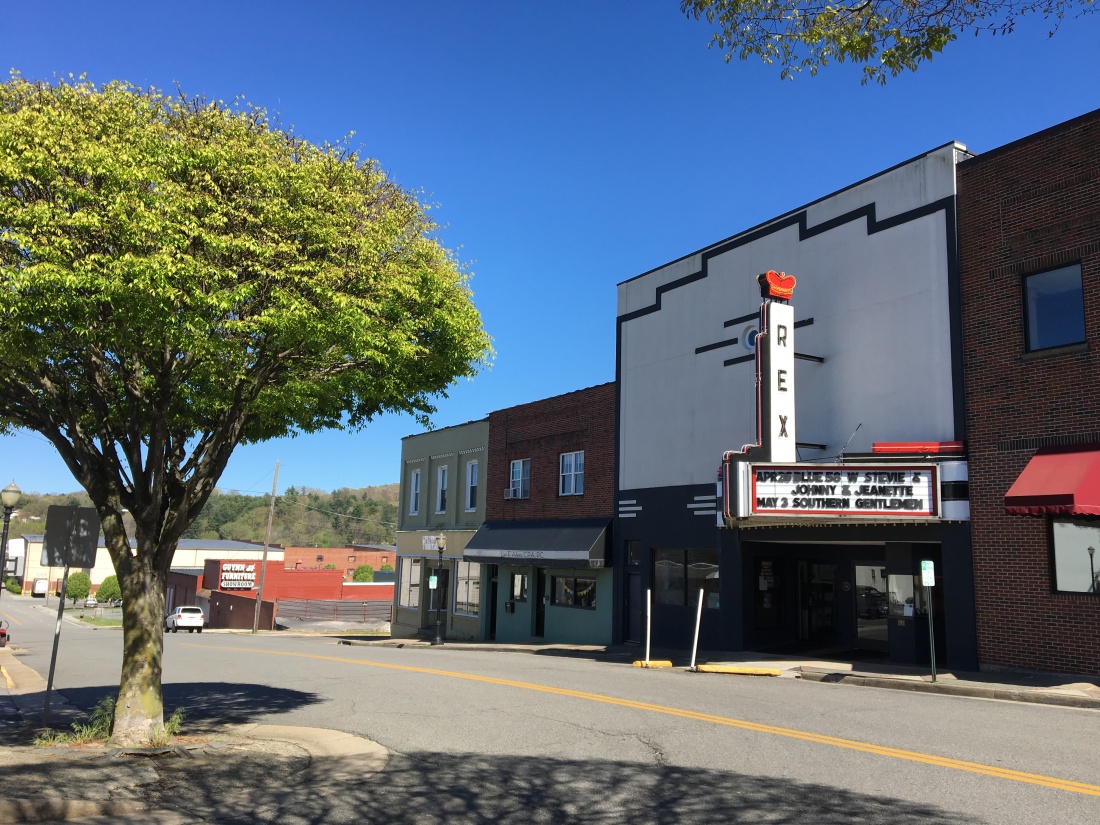 There were no shows on while we were there, so we wouldn’t get a chance to see the inside. Time was rolling on so we had an early dinner in The Galax Smokehouse, which offered real pit barbecue. And it was wonderful.

After dinner, we went back to the hotel and checked out the detail on the jam in Sparta. It sounded good, so we loaded the instruments up and headed out. I was driving, and we were slightly behind schedule but it looked a relatively easy drive. As I pulled out on to the highway, I hadn’t gone very far when a police car’s flashing lights loomed ominously into my rear view mirror. I pulled over, put the car in Park, and kept my hands firmly on the wheel, which is what I think I remember being the recommended course of action. The cop pulled in behind me and I had to wait a couple of minutes while he, presumably, checked out the Maryland plates on our rented vehicle. I waited until he was level with me and, with no sudden movements, lowered the window.

“Hey there, folks. How y’all doin?” was his opening gambit.

“Very well thanks, officer. How are you?” I replied, hearing him sigh deeply when he heard the accent. And then, he actually said it:

“You ain’t from around here, are ya?”

“Do you come through here much?”

“This is our first time ever.”

And that was that. I breathed a deep sigh of relief and paid religious attention to the speed limits thereafter.

We made it to Sparta and found the place where the jam was hosted. Ishbel decided to leave the dobro in the car, but I steeled my nerve and walked in carrying the mandolin. The jam was already well underway and there was a tight circle of musicians playing some high quality bluegrass to an audience of about 30 local aficionados. I decided to skulk in the back and make no attempt to squeeze into the circle. There’s a limit to how steely my nerve can be in a jam, and this was it.

We listened to the jam for  an hour and a half and picked up the names of a few songs with which we were unfamiliar. We left shortly before it broke up completely and headed back to Galax.

The following day, we once again had the excitement of trying to find a laundry. Google helped us out here, as there was one a little way out along the main road, not far from a Wal-Mart. We’re going to be on the road for a while so we decided to visit Wal-Mart and buy a couple of essentials: an electric kettle, and a cool bag for transporting milk. And tea bags. We have priorities. I dropped Ishbel at the laundry and took my mandolin back along to Barr’s Fiddle Shop.

The gentleman in the shop agreed to do the mandolin setup there and then, and I was able to watch him at work as he got on with it. Part way through the process, another gentleman came in and we had a pleasant three-way chat about music and what I was doing in the South. The gentleman then left, but returned shortly after to give me two CDs. It turns out his name was Johnny Williams, a respected bluegrass performer on his own and with his wife, Jeanette. He plays in a band called Blue 58 with his wife and the gentleman currently giving my mandolin a really good going over, Stevie Barr. In fact, if you look back at the photo above of the Rex Theater, you will see their names adorning the theatre’s marquee.

Stevie took all the strings off, gave the mandolin a thorough (and much needed) clean, restrung it, and reseated the bridge. He then fixed the action where I liked it and checked the intonation, so that the octave was perfect down the fretboard. I bought a spare set of strings from him as well and asked what I owed him. He charged me for two sets of strings.

“We don’t charge for changing strings,” he replied.

He had done a lot more than just change strings, and I was delighted with the improved sound from the mandolin, and the end to the annoying fret buzz that had led me to get the setup done in the first place.