Thursday was to be our last full day in New York City before we turned back towards the south. We had to get across to Soho to pick up Ishbel’s dobro after its repair, and we were going to take a look at some shopping, having singularly failed to add to our luggage at Macy’s. We walked up towards Houston St (the northern boundary of SoHo, which takes its name from being South of Houston) and passed a mural of some tragic members of the 27 club – rockstars who died at that young age. 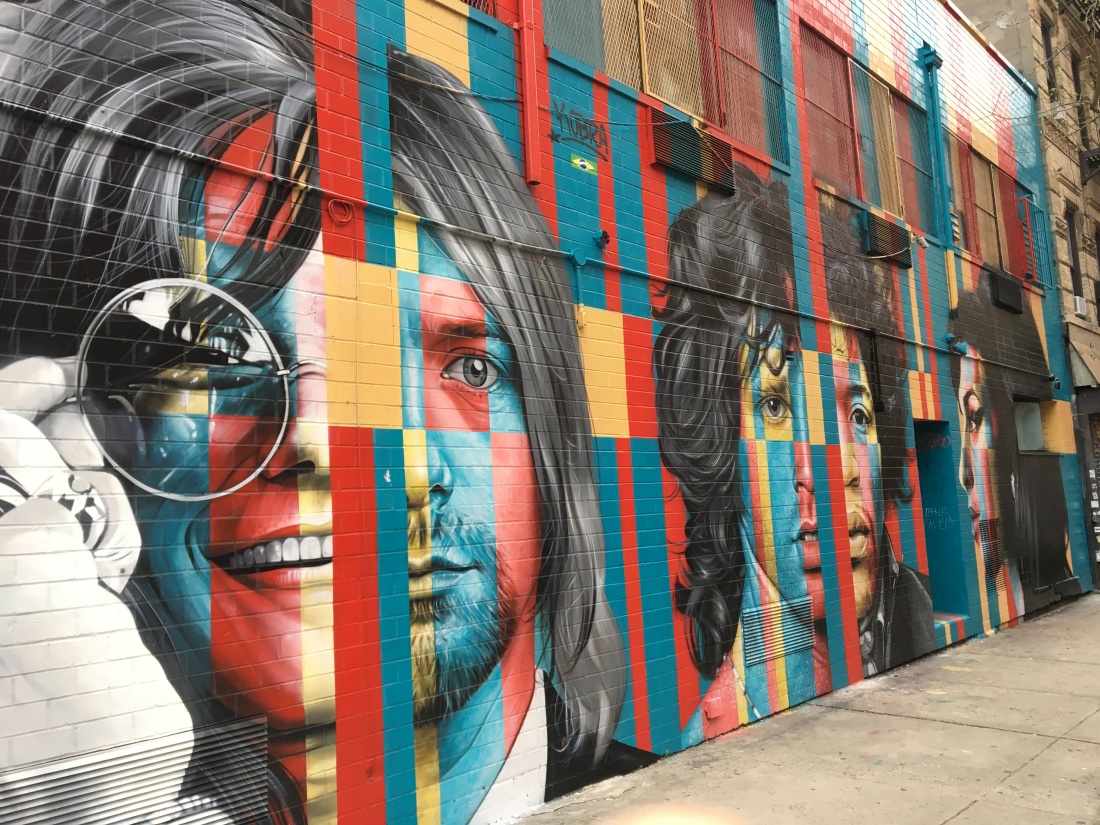 We crossed Houston at Bowery and Ishbel took this photo of the Bowery Mural.

We then headed West to Broadway and took a look at some shoes. Ishbel bought a casual pair, but I didn’t see anything I fancied. We wandered further down Broadway and Ishbel managed to buy a skirt suitable for a Bluegrass festival: mid-length, plain blue cotton. She bought this in a shop called Madewell, which was full of pretty young things, so I was surprised to see a vintage poster for a Joy Division gig in Altricham on the wall.  I spotted a Timberland store and insisted on going in. What did I see but my trusty blue boat shoes sitting on a shelf. I have a pair that I have been wearing almost constantly through this trip and which are now pretty much worn out. A direct replacement was perfect for me. Here’s a before and after on this footwear: 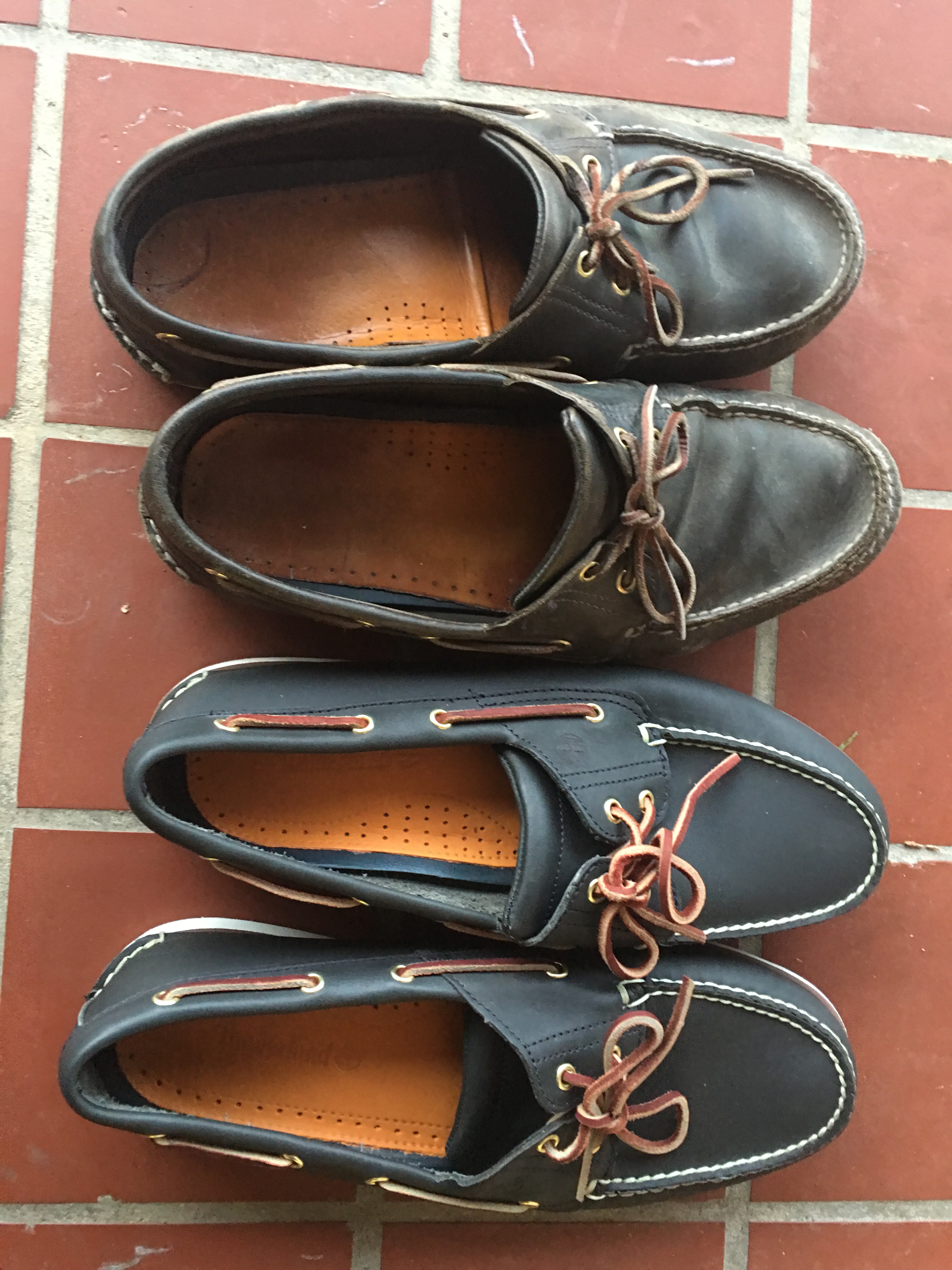 After the shopping, we picked up the dobro and headed back to the flat to practise and relax a little. We freshened up and headed out for dinner at the Minetta Tavern, a lovely little restaurant that I had been introduced to years previously by Ann, one of the friends with whom we’d dined on Wednesday.

Dinner was delicious. Their Black Label burger is expensive, but worth every penny. After dinner, I made a half-hearted attempt to find a karaoke bar – last night in New York offers freedom to go nuts – but gave up and we just headed back to the apartment.

Friday morning, we went through our, by now, polished packing routine and called an Uber to get to Penn Station. It seemed like surge pricing was in effect at 9:30 on Friday morning, but I went ahead with them for the convenience of him showing up outside our door. We started getting the luggage downstairs, and I was delighted to see the app tell me to look out for a Chevy Suburban, an enormous SUV which would have no problem accommodating our bags. To be fair to Uber, even fairly small cars such as we’d had in South America always managed to fit us in, so I didn’t have any real concerns. I was surprised, therefore, when the driver made a real fuss about the fact that we had two suitcases, two instruments, and a handbag each. “One bag, one passenger for UberX” was his mantra. I realised that his real issue was that his vehicle qualified for Uber Black rates if it was booked as such and he thought we should have booked that. I asked if he was refusing the fare, and he relented and took us to Penn Station. The name on his T&LC license was Fa Ni.

We were travelling to Baltimore on the Silver Star, Amtrak’s long distance service from New York to Miami. We decided to take advantage of the baggage check service and handed over the two suitcases to Amtrak to be transported in the baggage car, while we took care of the instruments ourselves. The journey was uneventful as we reached Baltimore safely and disembarked at that city’s Penn Station. We made our way up to baggage reclaim and asked how long it would be till the bags came up from our train – Number 91. The baggage handler is just on his way up, we were assured. We took a seat nearby and, shortly thereafter, spotted a gentleman towing an empty baggage cart in a relaxed fashion. After an increasingly agitated conversation with the fellow manning the desk with whom I had just spoken, I noticed him making a hurried return downstairs.

I cautiously returned to the baggage desk. They didn’t come off the train, I was told. They would need to contact Washington, the next stop, and have them take our bags off and return them to Baltimore. As he was saying this, his phone rang. He answered it and was informed that the train hadn’t left and the agitated baggage handler had been through all the bags and ours weren’t there. The next step was to call New York Penn Station to get to the bottom of this. He duly dialled the appropriate number and had barely introduced himself when he started saying “Uh-huh'” repeatedly. Without any need to provide the details of my luggae tag, and with scarcely any input from him, he was told that our bags would be on the Number 19 train, due in three hours later. Whether someone had transposed the train numbers, or just messed up completely, who knows. At least someone knew where our bags where. It would be a pity to come this far round the world on planes just to lose all of our bags on a 170 mile train ride.

We went to check in at our hotel. We had booked to stay at the Radisson because it had a good rate, but also because it was the Radisson’s Avis office that had given us such a good deal on our rental car. The train was due in at 17:05 and we had booked tickets to go to the baseball that evening, so we were carefully managing our schedule. I almost always go to Yankee Stadium when I visit New York, but Ishbel isn’t enough of a baseball fan to want to go to two games in the same week, and I’ve always wanted to visit Camden Yards, home of the Baltimore Orioles. Camden Yards opened in 1992 and was the first of the modern major-league ballparks to revert to the traditional, single-use style stadium which is now the de facto standard for new build MLB stadia.

We decided we would eat at the ballpark, and went out to get a coffee and visit a dyng institution: a bookshop.

This Barnes & Noble has a Starbucks in it and we fought our way there through the pouring rain. This did not seem promising weather for baseball. We had some much needed tea and bought what we came for: a road atlas of the US. We decided we couldn’t rely entirely on cell coverage in some of the places we were heading to, so some old-fashioned hard copy back-up was required.

We dropped off our map at the hotel and used Baltimore’s highly efficient light rail system to get back to Penn Station. We arrived at precisely the same time as our bags and we took the cab back to the hotel. Everything was coming together.  I just need to download the QR code for the baseball tickets to my phone and head to Camden Yards.

Little did we know that, by this time, Baltimore had a tornado warning in effect. Not just inclement weather – a bloody tornado! In these circumstances, I had to accept that my first visit to Camden Yards would have to wait a little longer. At least I got a refund for the tickets. Thanks to the howling gale outside, we dined quietly in the hotel and called it a night. Tomorrow the road trip begins in earnest when we pick up the car!

*I cannot mention the city of Baltimore without it bringing to mind an obscure little number, The Baltimores, by one of my great musical heroes, Jonathan Richman. The title of this post is a line from that song.