Lima sits at the Northern edge of the Atacama Desert, the only true desert that experiences less precipitation that the polar deserts. It’s dry here, so we were intrigued by Haku Tours‘ Nature Tour, which promised a trip to a Wetlands reserve 20 minutes from Lima. We signed up and were picked up from the hotel on Saturday morning to be whisked there. Our tour guide today was Edwin, a true native South American who could speak Quechua.

Ishbel and I were the only guests on this tour so we were in a nice 4×4 with Edwin and the driver, Jorge. This is a recent addition to their catalogue of available tours and, to date, not many people have signed up for it. They’re hoping to be able to introduce more ecology tourism to their itinerary and this is an early step in that direction.

The Pantanas de Villa Wildlife Reserve is located in the Chorillos district. I’ve mentioned a lot of Lima districts in previous posts so at this point, I will clarify the structure of the City / Region. The province of Lima is divided into 43 districts, each of which elects its own mayor who wields significant power over the public finances of that district. One of these mayors is also elected to be overall mayor of Lima, an even more powerful political position. In Lima, the district is important.

On to the Wetlands. We stopped at the entrance and paid our fees (included in the tour price) then drove into the park itself, where we encountered another gate, this time for a gated residential community. It transpires that money talks and if you can persuade a corrupt mayor to let you build a residential development in a Nature Reserve, nobody can stop you. Anyway, off through the houses till we reached the beach. Just inland from the beach is a large lagoon which is home to a wide variety of bird life.

From egrets and herons…

…to skimmers and gulls. It wasn’t easy to get close to them because burrowing owls nest in the area around the lagoon and we need to keep to the footpaths to avoid disturbing them, but Ishbel did her best with the big lens.

We had arrived here at around 10:30am, and the day was really heating up. There’s no shade out here either, so we were glad of our hats and pleased we had brought plenty of water. We walked past a group of Black Vultures feasting on a dead sea lion on the beach, and were glad to get upwind of that little party.

As we strolled on, we saw more and more birds, but they were moving around quickly and it was difficult getting a decent photo of them.

Eventually, the heat got the better of us and we made our way back to the car. Just as we were meeting up with Jorge, Ishbel spotted a bird sitting on a telephone wire and occasionally jumping off to catch flies on the wing.

It turned out to be a Kingbird.  We had an enjoyable visit and we were pleased to have seen some wildlife during our Peru trip. But it gets pretty hot there in the middle of the day.

We got back to the hotel and relaxed for a little while then Ishbel decided to pop down to our little courtyard with the camera to see if she could catch any of the bird life that we had seen over the last couple of days at breakfast.

Eventually, her patience was rewarded with a little Bananaquit that finally stayed in one spot long enough to be photographed. These things are about 8cm long, but make an incredibly loud noise. You will always hear them before you see them.

She also caught on camera the Rufus Collared Sparrow. 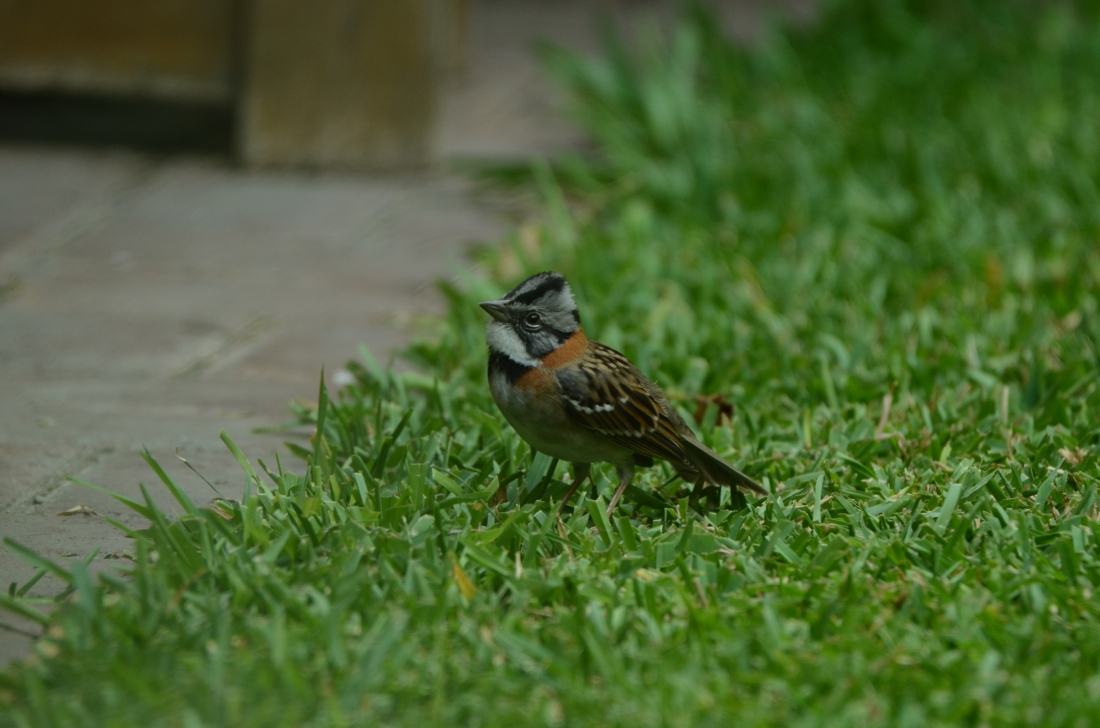 But she was beginning to despair of catching the main prize that we had seen a couple of times at breakfast: the Amazilia Hummingbird. As luck would have it, one arrived just as she was getting ready to pack up, so she hastily re-attached the camera to the tripod and fired off a couple of shots before it disappeared again.

It’s hard to make out the green head and bronze coloured body, but it’s so rare to see a hummingbird with its wings straight out that I thought I should share it.