As every schoolchild knows, the title of this blog relates to the question, where are the Andes? Sunday was our day for climbing the Andes. Or, an Ande. Or, more accurately, a foothill. The Andean foothill had been selected for us by Pablo, our AirBnB Experience guide, who had agreed to pick us up at the end of Metro Line 1 at Los Dominicos station at 8am. Another early start for us as we booted up for the walk. It was best to get out early as the day was likely to warm up significantly as it wore on, despite the crispness of the previous evening.

We were there on time, and Pablo picked us up in his little Suzuki and drove us out to the place where the walk would start. I was delighted to discover that we would be starting with significant altitude already under our belt and we would only be ascending a further 450m over the course of the hike. Although we were dealing with a mere foothill, in Andean terms, we would be reaching the height of the UK’s highest mountain, Ben Nevis.

The path was well worn and, as a result, very dusty with lots of loose stones. We were pleased to be wearing our hiking boots and using our poles for increased stability. These, incidentally, are another piece of extra gear we’ve been transporting with us. The poles are extendable so fit easily into the suitcases. The boots are what we wear on flights since they would occupy far too much space in the suitcases.

Pablo was an excellent guide and obviously walks the path on a regular basis so was able to keep us informed about what we could see and where we should stop for photos. 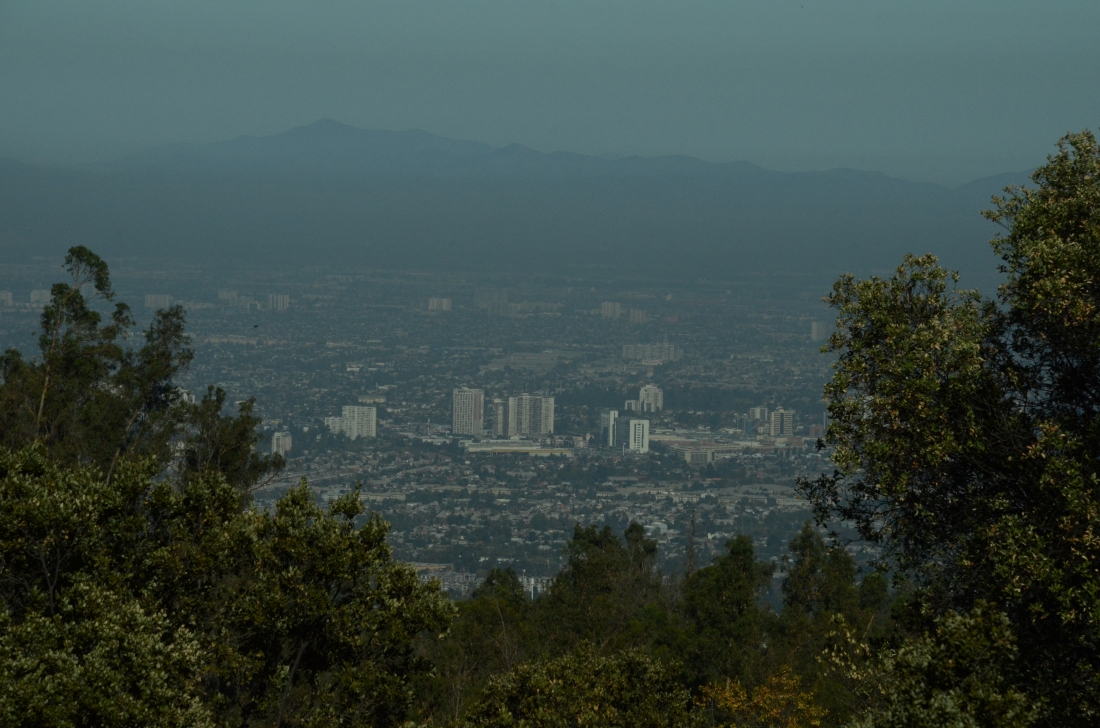 We walked up to a little waterfall that it seemed only Pablo was aware of, possibly because the ast section required a little bit of a scramble past a rock and over a path that at first seemed blocked by (non-native and invasive) brambles. But he guided us past that seeming obstacle to a quiet little spot by a babbling brook. 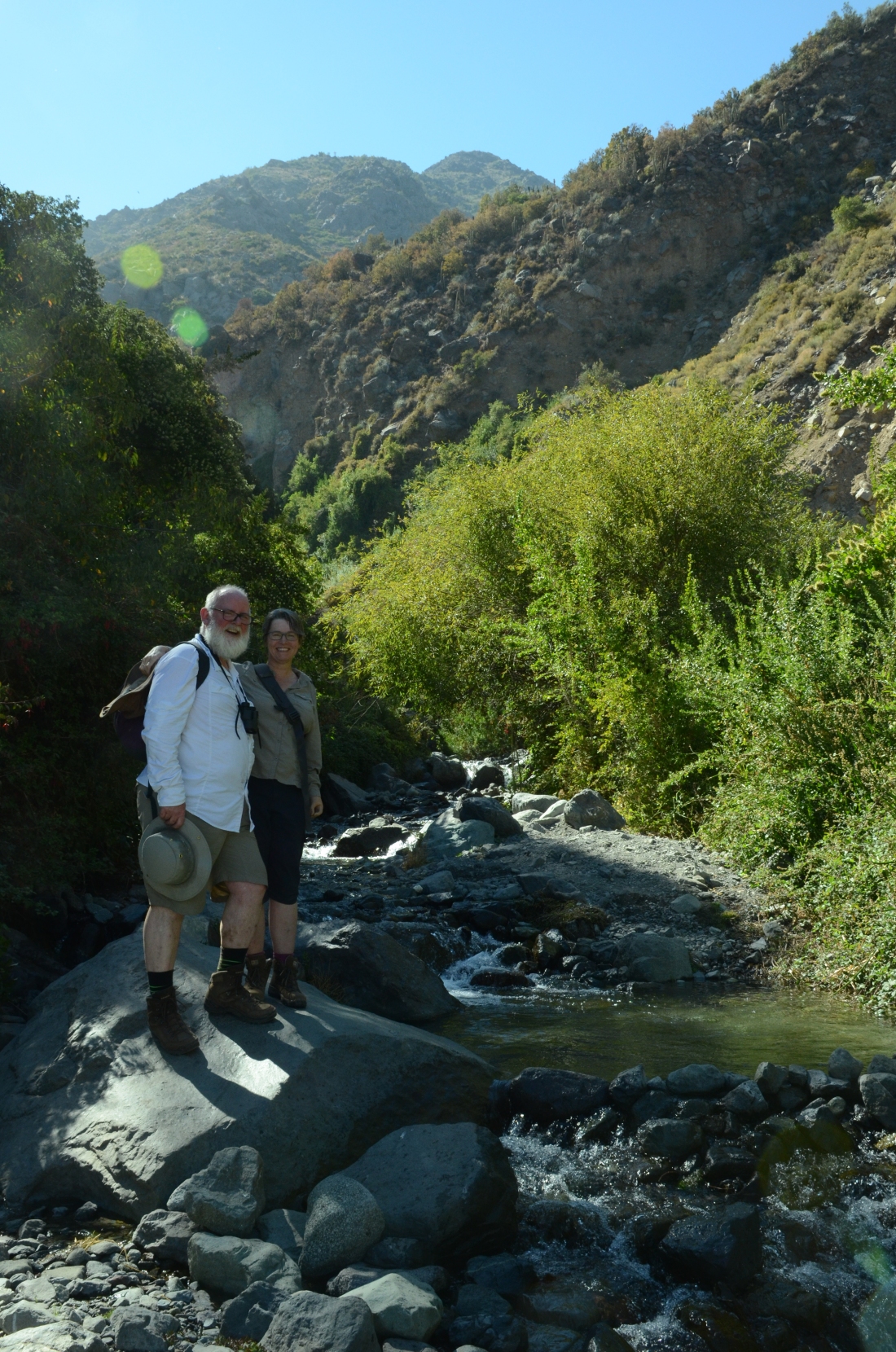 We began our descent, which was more treacherous than the way up and played merry hell with my knees, but we negotiated the path successfully. Included in the trip was a visit to the Baha’i Temple, a recently constructed place of worship visible from many points in Santiago as it perches on its hillside on the outskirts.

This is a religious group with which I am entirely unfamiliar. The only observation I would make is that, based on the grandeur of this building and the small number of local adherents, they ain’t hurting for money.

After this visit, we were dropped back at the metro station, said goodbye to Pablo, and made our way back to the apartment. It had already been a long day so we grabbed a quick meal and called it a night.

The following day, we decided to visit another place of worship by going up to the top of Cerro San Cristobal, the high hill we could see from our apartment. There is, fortunately for my knees, a funicular that makes the ascent so we walked over there through the Bellavista neighbourhood. Google Maps wanted us to take almost two hours to walk there as, for some unknown reason, it offered us a route that circumnavigated the entire hill rather than walking straight there in 15 minutes. Sometimes, Google is not to be trusted.

The trip on the funicular is condensed into 20 seconds here. I love a time-lapse.

We enjoyed the view from the top of the hill, but it was quite hazy on the day.

But we were able to see the tallest tower in South America, the Costanera Center Torre 2. We also witnessed what was likely to be a family of Harris Hawks honing their hunting skills. 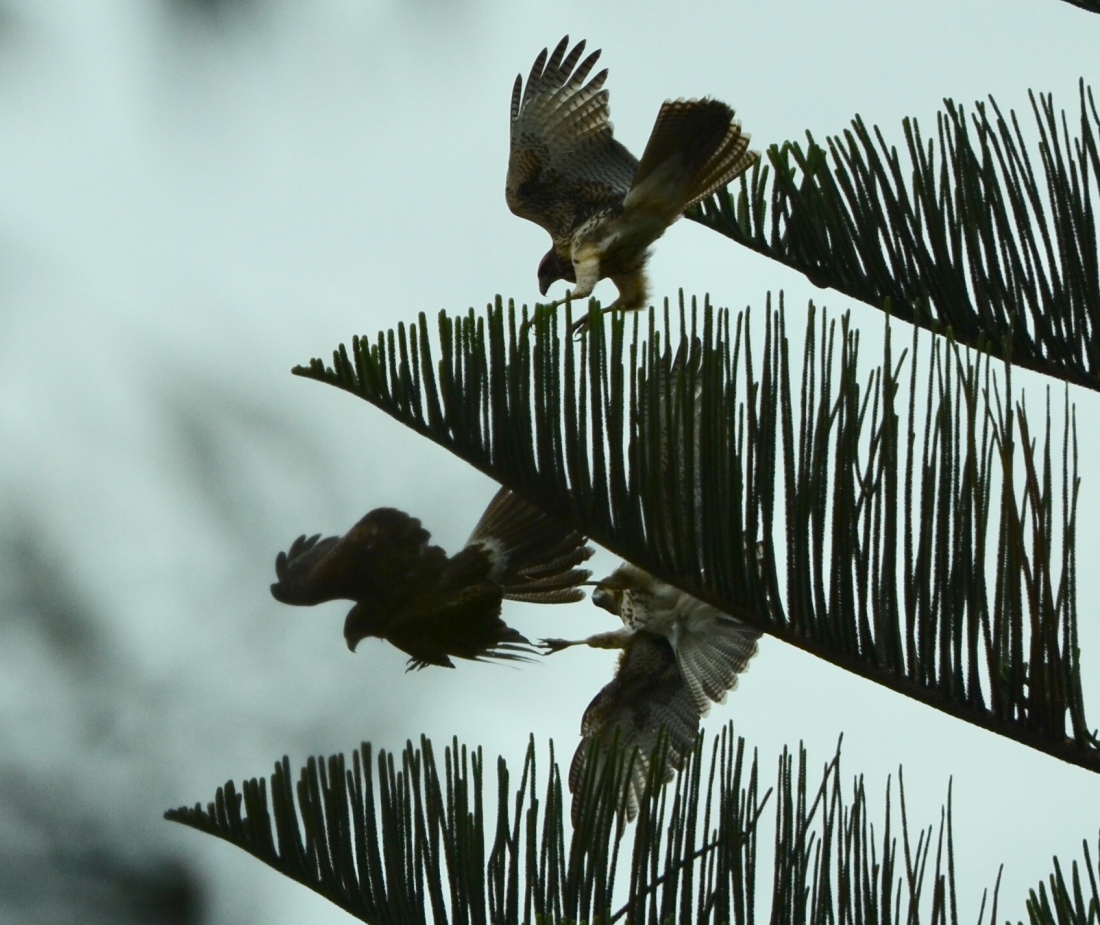 We headed back down and undertook another walk around our neighbourhood, with our eyes peeled for more street art. 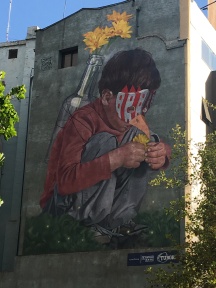 After this, we had a laundry to pick up – the everyday tasks are still important and need to be managed! This was our second last day in Chile, so we wanted to be prepared for the next leg of the trip.