…we crossed the Andes in a Boeing 787 Dreamliner. Latam airlines are using this plane on a few of our flights with them, and so far it’s been a very pleasant experience. Ishbel wasn’t entirely happy with our proximity to these mountains, but it was a clear day and the view was wonderful. 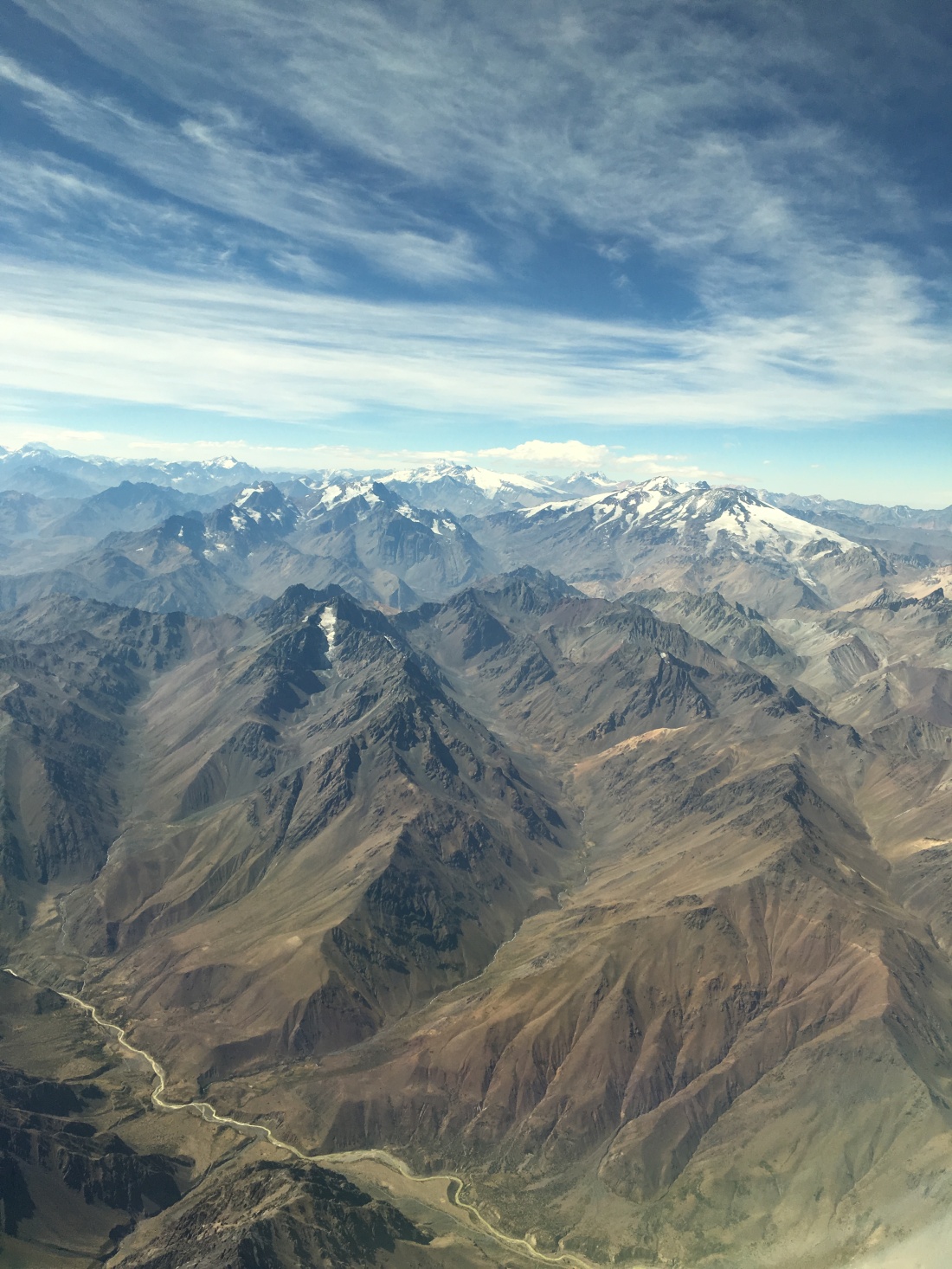 It’s only a two hour flight from Santiago to Buenos Aires and everything went smoothly. The immigration procedure was straightforward and the queues were nothing like as bad as they were on our arrival into Santiago. So we emerged quickly from the formalities to be greeted by a disappointing absence of our pre-arranged hotel driver. We communicated with our hotel only to find out we wouldn’t be picked up.  The driver had been unable to make it out of the city due to some major protests and the associated police presence. We made our own arrangements and headed into the city.

We were booked into L’Hotel Palermo for our Argentinian stay. I’d read good reviews of the place and it was situated in the part of town where we wanted to stay, Palermo Soho. Palermo is BA’s largest barrio and has a couple of different designations: Soho is named because it’s alleged to resemble its NY namesake, while Palermo Hollywood is the more upmarket part, with designer shops and achingly cool cocktail bars. We were happy with our choice of area and, when we eventually got there, with our choice of hotel. The rooms were subdivisions of a number of townhouses, gathered around a central courtyard, with a small pool. It was perfect for us. After checking in and watching the poor concierge lug our weighty bags upstairs (there were no lifts and he insisted) we unpacked then headed out for a look at the ‘hood.

What we saw mostly were bars. We were one block away from Plazoleta Julio Cortazar which is bounded on all sides by bars and restaurants. The roads that radiated away from the plaza appeared also to be lined with bars and restaurants. We were going to like it here. We had a couple of beers and a bite to eat at a little place looking out over the square, which my Revolut app informed me cost GBP 13. At the current exchange rate (ARS 40 to one USD) living is cheap here.

From our vantage point, we identified a place we would definitely be visiting. It advertised “Wine Tasting” on a cinema marquee so we decided to make our way over there and find out more. The first thing we noticed was that the legend above the door was actually picked out in wine bottles.

We found out that they offered tastings at 5pm and 7pm, so we booked ourselves in for the early slot on Sunday evening.

Thursday was our first full day in Buenos Aires, and I wanted to visit the Cathedral. Of football. The stadium of Boca Juniors – La Bombonera – was first on our list. The iconic Boca shirt has been worn by some great players over the years – Maradona, Batistuta, Riquelme and more – and they are identified as the working class heroes of Buenos Aires, as opposed to the more refined air that surrounds their great rivals, River Plate. La Boca itself is an interesting area, but not one where the unwary should wander too freely.

They have a nice museum at the stadium, but limited English language interpretation of the exhibits. An enjoyable visit nonetheless for anyone with an interest in the beautiful game.

We used Uber to get to and from Boca and the journey took between a half hour and forty-five minutes, costing six dollars each way. This was very cheap, but as you will know if you’ve been keeping up with our progress, nothing stands in the way of Ishbel’s drive to utilise the public transport systems of our host cities. But that was an adventure for another day. For the moment, it was back to Palermo and another wander around the streets.

Over the course of our travels, we have been pretty much two meals a day people, occasionally taking a lunchtime snack if we’d breakfasted early or planned on dining late. Buenos Aires is designed to thwart that plan. In the evenings, restaurants don’t open until 8pm and stay open into the wee small hours to serve the needs of their clientele. By 6pm we were starving and went on a hunt to find somewhere that might be open. We did eventually track down a place that was accepting diners at this unfashionably early hour so popped in, looked at the menu, and decided what we would be having. We had been warned that you should always ask in BA whether cards are accepted. I’d forgotten to do this on the way in, but had the presence of mind to inquire before ordering. “No. Solo effectivo,” was the response, meaning cash only.

We hadn’t yet picked up any Argentinian money so made our excuses and left. Eventually, we did track down a restaurant that was both open and accepting of plastic. It was a tapas place and we were so relieved that we forgot to ask what size the tapas portions were. They were huge. One of the problems with the restaurants being cheap is that you have an expectation of value in this type of place. While your mind expects a small dish of patatas bravas for two quid, the Argentine reality is that you’re getting a lot of food for that price. Needless to say, there were a lot of leftovers and a lesson learned.

We did eventually manage to find a cash machine and withdraw money, but the charges for doing so are frighteningly high. If you find yourself in need of cash in Argentina, you should definitely convert currency rather than use an ATM.

*If you’re wondering what the title is all about, it’s a reference to an episode  of the Michael Palin/Terry Jones series Ripping Yarns: Across The Andes By Frog.