I had been keen on fitting into our Chilean visit an opportunity to sample the local wine production. To that end, I undertook some research with the aim of sourcing a pleasant, reasonably priced vineyard tour. Such a thing seemed to be unavailable, with prices coming in at between USD 150 and USD 200 per person. I decided that this was more than I was willing to pay to spend all day on a bus being shuttled to three vineyards coupled with a visit to Valparaiso. Further investigation was required, blended with a little imagination.

My thought was that one need not visit a vineyard to taste wine. Perhaps a local wine bar might present a tasting that would meet our needs. I found that there existed, nearby, a place called the Santiago Wine Club. We made our way to their threshold and asked about tastings. They do not offer tastings but pointed us in the direction of Bocanariz, a wine bar and restaurant which would fit the bill. Even on Wednesday afternoon, there were “Reserved” signs on many of the tables and it certainly looked like the kind of thing we were looking for so we booked a table for the Friday evening.

Having used the metro to visit the museum of human rights earlier in the day, we were feeling quite pleased with our new-found mastery of Chile’s subway system. We had acquired the necessary electronic access card – called bip! and pronounced “beep” – and loaded the necessary funds to allow us to travel more widely across the city. This meant that when we researched further how we should visit Valparaiso and discovered that comfortable modern buses ran between the two cities, we decided that would also be added to our schedule, and pencilled in the excursion for Saturday.

The last bit of forward planning we settled on today was organising a hike. We could see the Andes from our living room window, so we had to get into them at some point. We tracked down a guided hike on the AirBnB Experiences section and made a booking for Sunday. The week ahead was becoming quite crowded and Wednesday had faded into history.

On Thursday, we undertook an unusual tourist quest and visited the Cementario General, the cemetery where are interred the great and the good of Chilean history. Almost all of Chile’s presidents are buried there, and it also houses the infamous Plot 29. During the Junta, countless murdered dissidents were secretly buried in this plot, the public becoming aware of it after a tip-off to the press.

Many of the graves in this section still hold unidentified victims.

The cemetery claims to hold two million buried Chileans, and it stretches over many acres. We went and paid our respects to Allende’s grave, but also saw some interesting things that we certainly wouldn’t have encountered in the UK. The use, for example, of Mayan symbols seems incongruous in a Christian – predominantly Catholic – graveyard.

And we were struck by the existence of crypts and plots for specific groups of workers. For example, there are communal crypts for Glassworkers and for Railwaymen. The one that leapt out at us, however, was this one:

This is a plot dedicated to deceased circus workers – hence the big top theme.

As we walked towards the graveyard’s exit, we encountered a funeral on the way in. Naturally, we stepped aside and doffed our hats, showing appropriate respect. More respect than a couple of members of the funeral party who were engaged in animated conversation on their phones as they accompanied the cortege. The tolerance of the bereaved in ignoring this was admirable. If this were to happen at my funeral, you, gentle reader, have full licence to educate the individual forcefully in the value of common decency.

We departed the cemetery and returned to our Lastarria neighbourhood for refreshment and a wander. 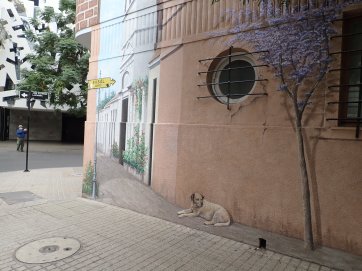 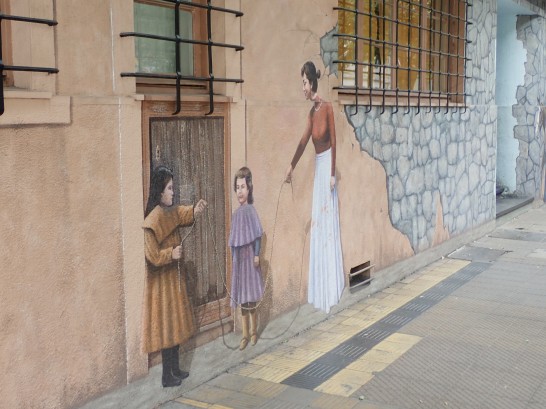 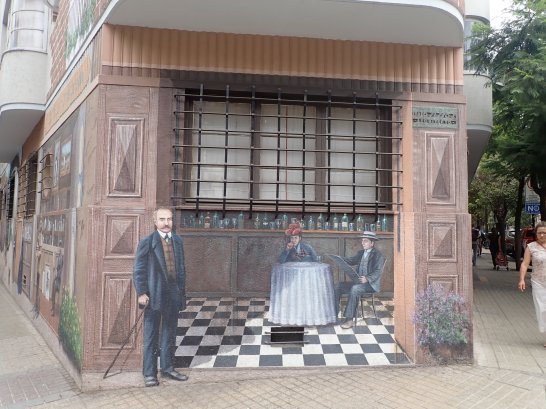 There is a lot of street art around and this was an especially interesting work on a corner building just along the road from us. Street art was to be a theme for the next few days and we learned a lot about the works and the artists prevalent in Chile.