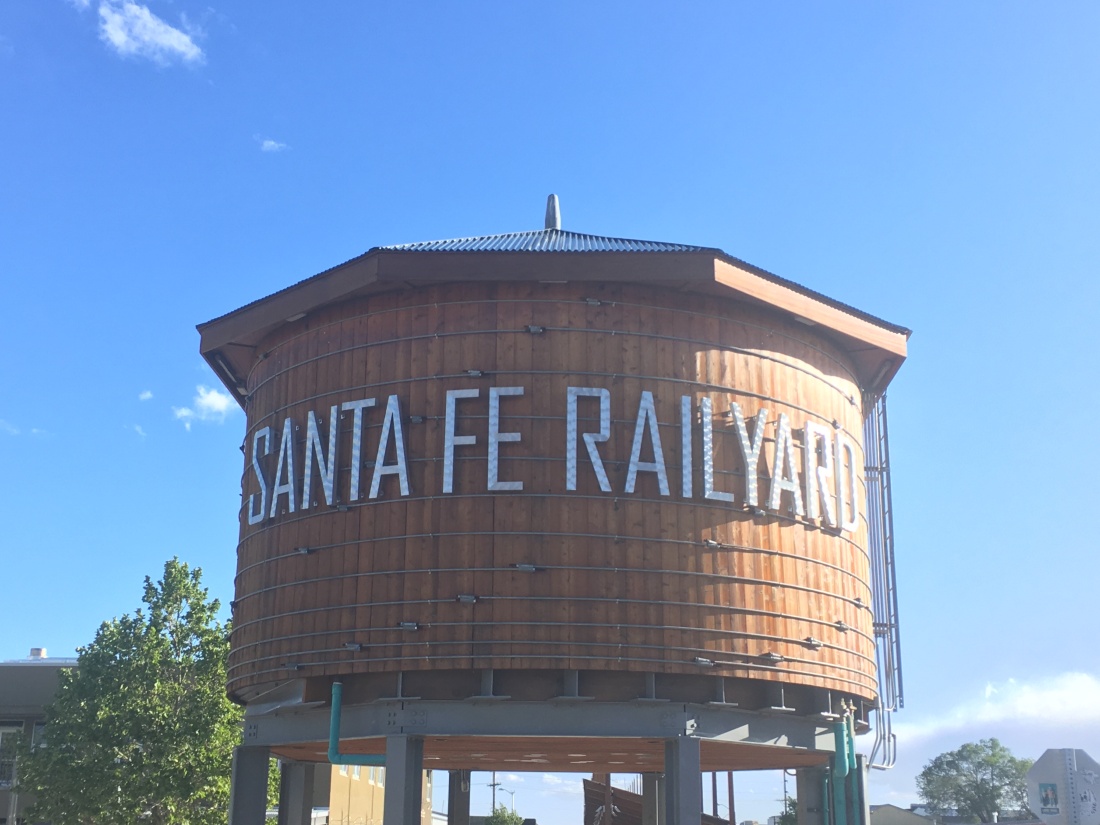 Midnight Special is one of those rare songs that becomes a standard in more than one genre. It crops up regularly in Bluegrass/Country jam sessions, and has been recorded by artists as diverse as Leadbelly, Merle Travis, and Eric Clapton. My own favourite is the recording by Big Joe Turner.  At one point in the song he laments, “My baby left me on the Santa Fe”, cunningly rhyming the line with “me” which delights me every time I hear it. The reference is, of course, to the Atchison, Topeka and Santa Fe Railway which, in its heyday, transported millions of Americans across the continent, including Big Joe’s lady love if the song is to be believed.

On Friday, we were travelling between two former AT&SF rail depots – Dodge City to Santa Fe. Our route took us South-West out of Kansas through the Oklahoma Panhandle, passing close to Texas and into New Mexico. Since picking up the car in Baltimore, Maryland, we’ve visited or passed through Virginia, North Carolina, Tennessee, Kentucky, Mississippi, Arkansas and Missouri. Before that, we’ve been through Massachusetts, Connecticut, New York, New Jersey, Pennsylvania and Delaware. It seemed a shame not to hit Texas – so we did. By about ten feet.

Childish, I know, but we did it anyway. On our lengthy drives we tend to limit our driving stints to two hours each. On this particular leg of the journey, time expired as we approached a little town called Clayton, New Mexico.

We decided to have a coffee here as, by the standards of some of the places we had driven through this was a thriving metropolis. Google Maps indicated it was home to not one, but TWO cafes. We parked in the centre of town with no difficulty whatsoever on this Saturday lunchtime and approached the first of the cafes. “Closed due to Graduation” read the sign affixed to the door. The second cafe repeated this legend word for word. Luckily, there was a hotel in town.

We were delighted graduation had thwarted our attempts to patronise the cafes since this place was magnificent. The Hotel Eklund was first built in 1892 as a saloon and gambling hall with operations expanding over the following ten or so years to include hotel accommodation. Whatever modernisation has occurred since has been done incredibly sympathetically and as soon as you cross its threshold you feel as if you have stepped into the old West. Accidental finds like this are always a joy for us, and it seems like the author James Lee Burke feels the same way. The hotel lobby features a small extract from his novel Bitterroot in which he writes about the hero entering the hotel. Ishbel now has Bitterroot on her Kindle app.

After some excellent cofffee, and being tempted into chili cheese toasties, we were back on the road. We arrived in Santa Fe in late afternoon with little time to do much in town so we decided to play a poker tournament at a local casino called Buffalo Thunder. We went out there and signed up but, unfortunately, there were only enough entrants for a single table. We never enjoy being on the same table and it was made even worse by us ending up in a big hand confrontation in the second hand of the tournament. Eventually, my AK suited lost to Ishbel’s pocket Kings but it went to showdown and we both showed our hands which I think reassured the rest of the tournament entrants that we wouldn’t be soft-playing each other. Eventually, I was lucky enough to chop the first place prize money with one other guy so we walked away with double what we had spent on entry fees which was nice.

On Sunday morning, we were up and on the go quite early. After breakfast at the hotel, we drove into town and  found a nice parking spot. We wanted to visit the Georgia O’Keeffe Museum.

We had visited and enjoyed the exhibition of her work at Tate Modern a couple of years ago so were eager to see her works here in New Mexico. O’Keeffe was both a remarkable woman and a remarkable artist, embracing modern trends in art earlier than many of her contemporaries and building a body of work that has stood the test of time. 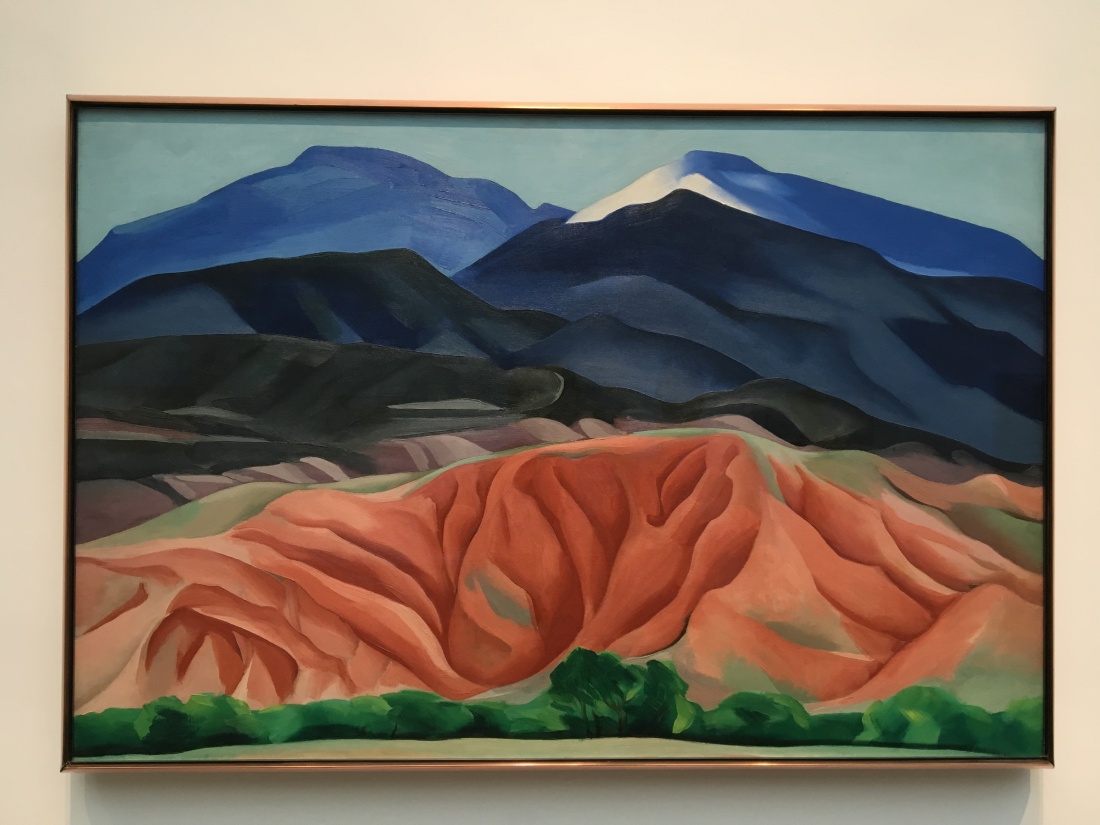 After the museum, we had a walk around the historic Plaza. The city is constructed in what seems to be a very traditional fashion in a style known as Pueblo Revival.  Almost every building maintains that style, even the multi-storey car parks… 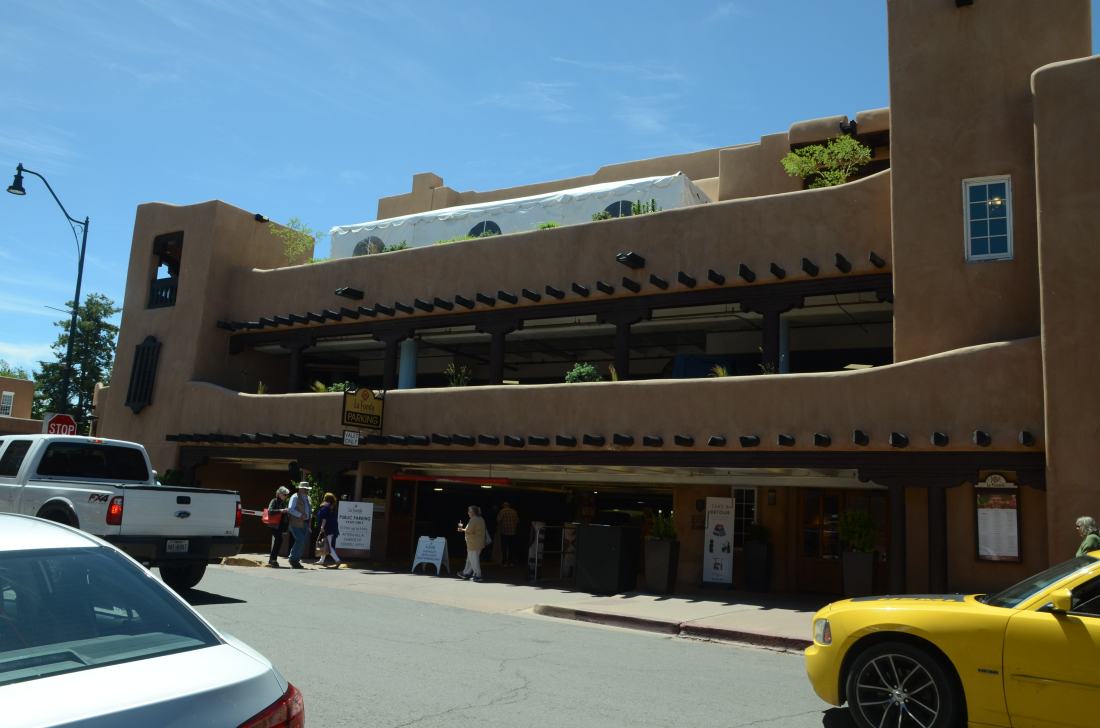 From town we walked up to the historic site of Fort Marcy. This fort was established in 1846 to cement and demonstrate US control over the New Mexico Territory shortly after the declaration of war on Mexico by President James K. Polk.

Few visible signs of the fort’s existence remain, but a series of plaques on the walkway up to the summit provide a glimpse of Santa Fe’s colourful history. Walking back through town, we couldn’t help but notice that there were chili peppers hanging everywhere.

These are called Chile Ristras (I’m not going to touch the debate over whether it should end in an ‘i’ or an ‘e’) and are said to bring three things: good health, good luck, and dried chilis.

After our walk, we returned to the hotel to freshen up before dinner. We ate in Dr. Field Goods Kitchen where we enjoyed an excellent Christmas enchilada. Why Christmas? Because it comes with both red and green chili. We also enjoyed a pint of El Jugo Hazy IPA from Albuquerque’s La Cumbre Brewery. I’ve had hazy beers before, but this one had the colour – and clarity – of fudge. Nevertheless, it was delicious.

Monday was Memorial Day, a national holiday here. We had decided to enjoy some of the New Mexico hills today and setted on the Chamisa Trail.

I don’t think we had really appreciated that Santa Fe lay at an altitude of 7,200 feet. And we were driving another 800 feet up into the mountains. Then walking another 500 feet up from there. Taking all that into account, we coped remarkably well with the physical exertion in the thinner air. The whole walk was only around 5 miles, so it wasn’t a huge distance but I was feeling pretty tired by the time we finished. We were lucky because the weather was sunny but cool and there was a lovely breeze blowing . It really was a quite idyllic day.

One thing I’ve noticed is that, at home, we go for walks on footpaths. Here, you hike a trail which sounds like an altogether more robust form of activity. I’m always going to say that from now on.

In the evening, charmed by the beer from the previous evening, we had dinner in one of Santa Fe’s own brewery taprooms: the Second Street Brewery.

I ordered a burger here and it was delicious. And I finished less than half of it. I’m blaming the altitude. I managed all of my beer, though.

We really enjoyed our brief time in Santa Fe. Everything about it feels relaxed, laid back. Nice.