We woke late on the second last day of 2018 with very little by way of a concrete plan. Ishbel to the rescue once again as she examined Google maps to determine where we would go today. The Xijiang River, on which our ferry had transported us here from Hong Kong, looked easily walkable from the hotel. Not only that, our route would take us through the Star Park – a park that recognises achievements in the arts by individuals from the region. Tony Leung and Chow Yun Fat were the two names that we recognised from the list of those honoured but that is probably more a reflection of our ignorance of the arts in China than anything else.

The statuary in the park was interesting, of course, but beauty can also lie in everyday items and we were both very taken by the bamboo ladder that we saw tucked away in a corner of the park.

It was just so beautifully engineered from an everyday material that we had to get a picture and share it with you.

After the park we carried on down to the river. I think I mentioned before that the cost of data charged by our mobile carrier here in China is prohibitive, so we are downloading screenshots of maps using the hotel wi-fi before we set out on these epic walks. This sometimes means we have to adjust our plans based on real world conditions without the benefit of Google maps adjusting along with us. So it was today when our planned route petered out into a dirt road before our very eyes. We improvised and carried on along the main road until we reached a turn-off that climbed steeply towards what could only be a bridge over the river. As we made our turn, Ishbel was briefly excited by a poster announcing a “River Trail”. Further reading clarified that this “trail” was in fact an eight lane highway covering 76km and costing CNY 1.44Bn. Not the scenic stroll she had initially envisioned.

We carried on down where the bridge road went up and hit the river bank as expected. The water looked very clean from our vantage point, so presumably it was perfectly safe for this chap to fish there. 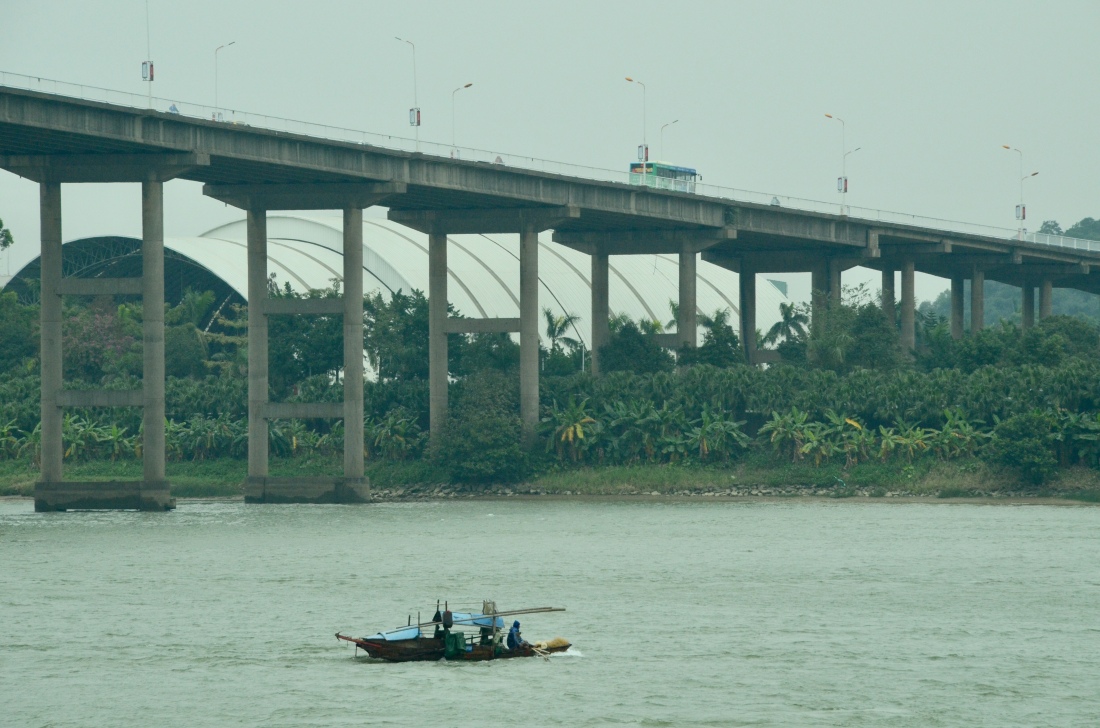 We had envisaged a pleasant river bank stroll for our Sunday afternoon, but our plans were thwarted by a large container base which claimed the majority of the bank in our preferred direction. Consequently, we scurried inland and strolled in the general direction of home.

As was the case yesterday, we seemed to be the only Westerners on the street and the reactions of the locals were hitting about 8 on this device…

As was also the case yesterday, we still need to remember to check the scale on Google maps. Another 7 miles completed today so, once again, it was back to the hotel and we relaxed by playing our instruments and jamming for a little while.

For dinner, we wimped out on external exploration and ate instead in the hotel restaurant. Tomorrow is New Year’s Eve for many, but it’s Hogmanay for Scottish people. It’s a cultural imperative for us to stay up until midnight and talk to friends and family early in the New Year. And to drink. We definitely need to check the map scale if we’re to stay awake until late.