Thursday was scheduled to be a busy day. We were driving from Hokitika (meaning: “Take the right path”) to Wanaka (a corruption of Oanaka, or the place of Anaka).  This was to be the longest leg of our west coast journey, covering 419km with a Google Maps estimated journey time of five and a half hours. Road travel takes longer in New Zealand. So much so that I’m starting to suspect they’re lying about the mileages.

Apart from the travel time, we wanted to visit at least one of the glaciers that we would be driving past: Franz Josef or Fox. We also wanted to be able to stop for a stroll or to enjoy the view as we went. Also, we had heard that a slip had occurred on the road, meaning a huge chunk of the hillside – rock, soil, trees and other vegetation – had fallen down on to the road, so it was open only for a ten minute window on the hour every hour.

Coping with these complexities meant another reasonably early start, although not as early as Ishbel chose. She was up very early and shooting atmospheric photos across our back yard river. 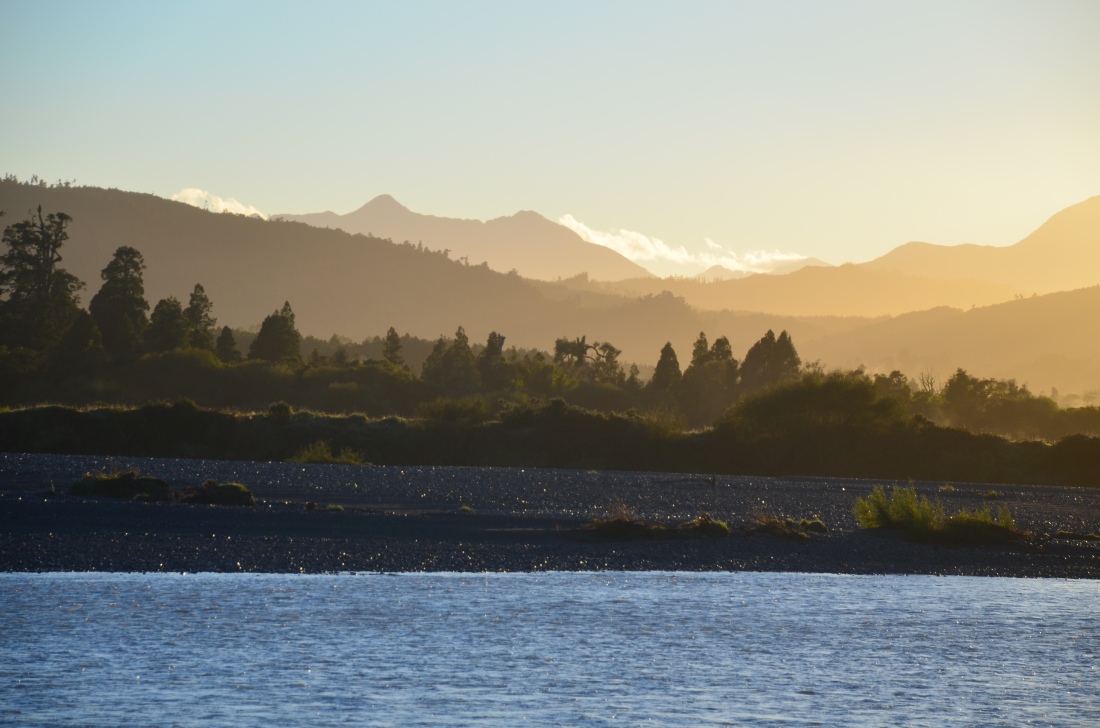 A nice view to wake up to.

As we passed through Hokitika town the previous evening, I’d noticed a sign announcing the National Kiwi Centre. I didn’t want to come to New Zealand and not see a kiwi, and the chances of observing one in the wild are vanishingly small, so I wanted to pop in here and observe the symbol of all things New Zealand. Everyone else agreed to indulge me, which was nice of them, so after packing up we headed in to town and paid our entrance fee. As luck would have it, the Kiwis are scheduled to be fed at 10:15am, just after the giant eels are fed at 10am. We decided to take in both experiences.

When the curator offered the opportunity to visitors to assist with the feeding, Ishbel and her sister were first in line. 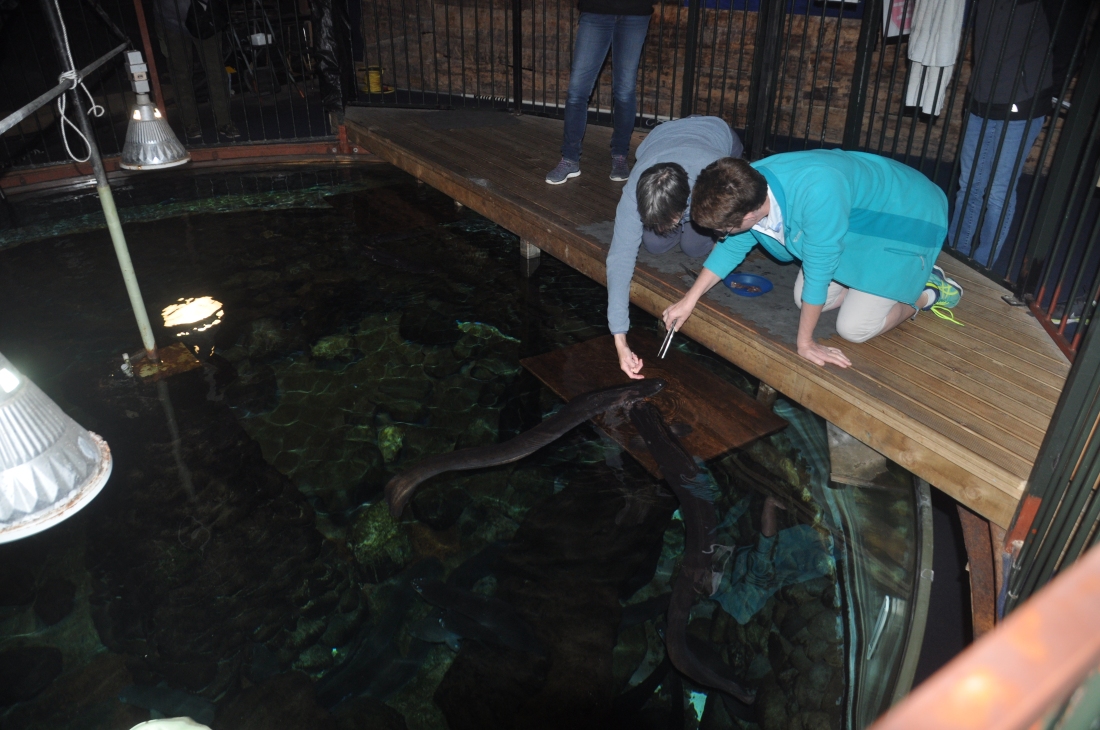 They may not be easy to see in this photo, but these long finned eels are well over 2m long and allow themselves to be stroked.

After the eels, we were able to see the kiwis. As nocturnal animals, they are kept in near darkness so no photos of them, but it was lovely to see them digging around for food in the topsoil. 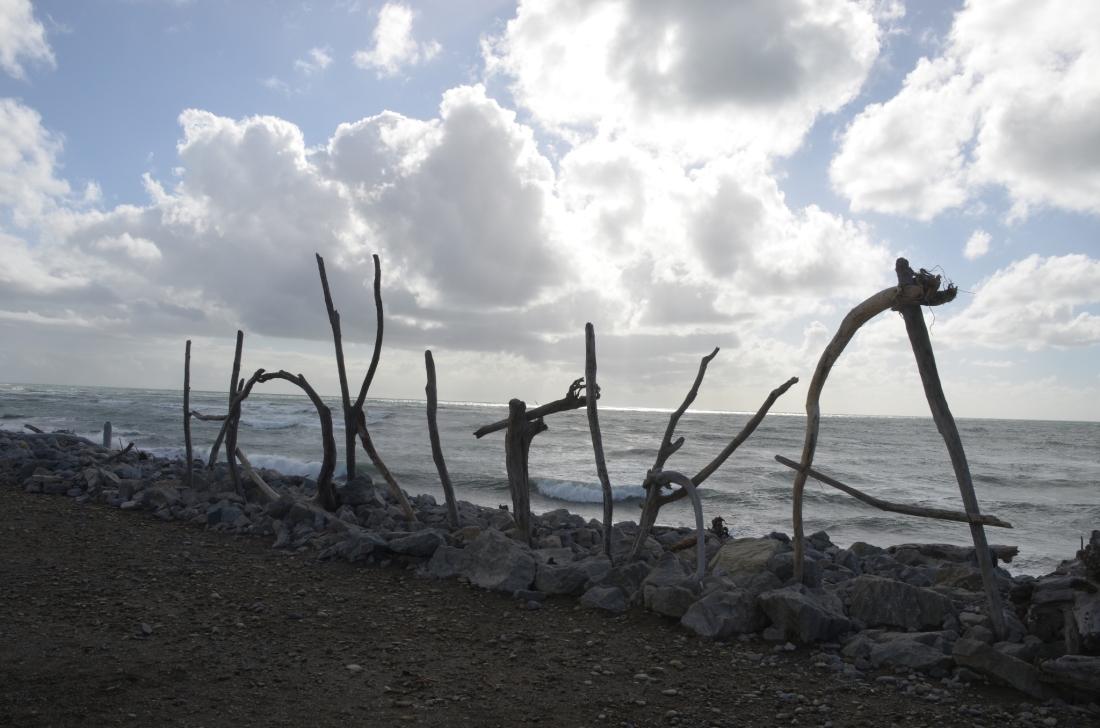 …we were back in the car and headed due south along the coast. We had cleverly calculated our journey to arrive at the point of the landslip just five minutes before the hour so we would be able to keep moving efficiently. Sadly, roadworks in New Zealand are as unpredictable as they are anywhere else, and we all had plenty of time to stretch our legs and get a breath of air before the road eventually opened for us a half-hour later than scheduled.

We stopped in a couple of places for a look out over the sea but then started the steady climb up to Franz Josef Glacier. I was surprised to learn that the local town was called Franz Josef Glacier, having grown up around the tourist traffic attracted by the ice. We parked up and took the walk to the closest point where tourists are currently permitted, about 750m away. Along the walk, there are various signs indicating where the edge of the glacier had been at various points over the past 100 or so years. It has receded an enormous distance as a direct result of climate change.

Back in the car, we set off again for Wanaka. Time was getting on, so we wanted to get to our destination by this time. We did stop off at one more viewpoint and encountered New Zealand’s answer to the Scottish midge: Sandflies. They are quite a bit bigger, but no less voracious than our Caledonian bloodsuckers. Once we realised that we were under attack, we hopped back into the car and set off down the road again. I spotted one that had stowed away on board and managed to swat it, leaving a smear of what was probably my own blood on the dashboard.

We eventually made it to Wanaka and had a rudimentary dinner, thanks to our rudimentary kitchen. This was the first place we had stayed where it seemed clear that the owner was using the space as a money making business rather than being a “host” in the more usual sense of the word. It did the job, and we were once again early to bed, not having seen anything of Wanaka. The following day, we were scheduled to drive to Manapouri, via Queenstown which was another three hour drive but we didn’t want to leave without having seen anything of Wanaka.

We drove down to the shore of Lake Wanaka which, even at this time of the morning, was buzzing with watersports activity. However, the activity that fascinated us was happening just under the short pier. Having seen the eels in captivity yesterday, we were delighted to see the wild version of these creatures gathered en masse. I’ll admit that I did buy a bag of eel food for them (which was just overpriced dry cat food, I suspect) and threw it into the water, creating a feeding frenzy. 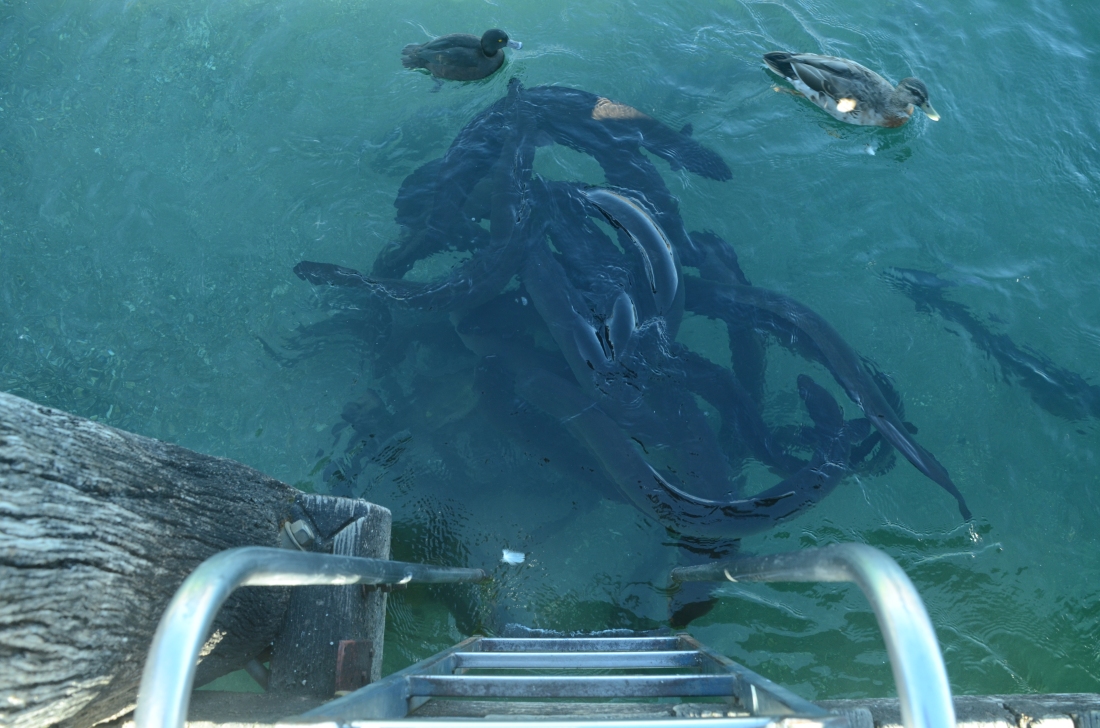 Ducks and gulls joined in when they realised there was a free meal available. That ended our brief stay in Wanaka, and we set off on the next leg of our journey.

We were booked on the train from Christchurch to Greymouth on Wednesday morning. The ‘Z’ annoys me. Yes, I know it’s New Zealand but…just don’t. Moving on…

The train was due to leave Christchurch at 8:15am and they want you there 30 minutes before departure. With AirBnBs, we’ve discovered that the rate determining step on how quickly you can get people on the move is bathroom and shower access. Invariably (so far) there’s only one, so an early start means an even earlier start to make sure everybody can get cleaned up before departure. We overcompensated on this occasion and were at the station by 7:25. The train is set up for this specific journey which means there is negligible luggage space in the passenger carriages so suitcases need to be loaded in the allocated luggage car at the rear of the train.

We had already established that the train had a restaurant car. It was in carriage C, so we were delighted to discover that our seats were at the rear of carriage D. Handy for the cups of tea necessary for a four hour journey. 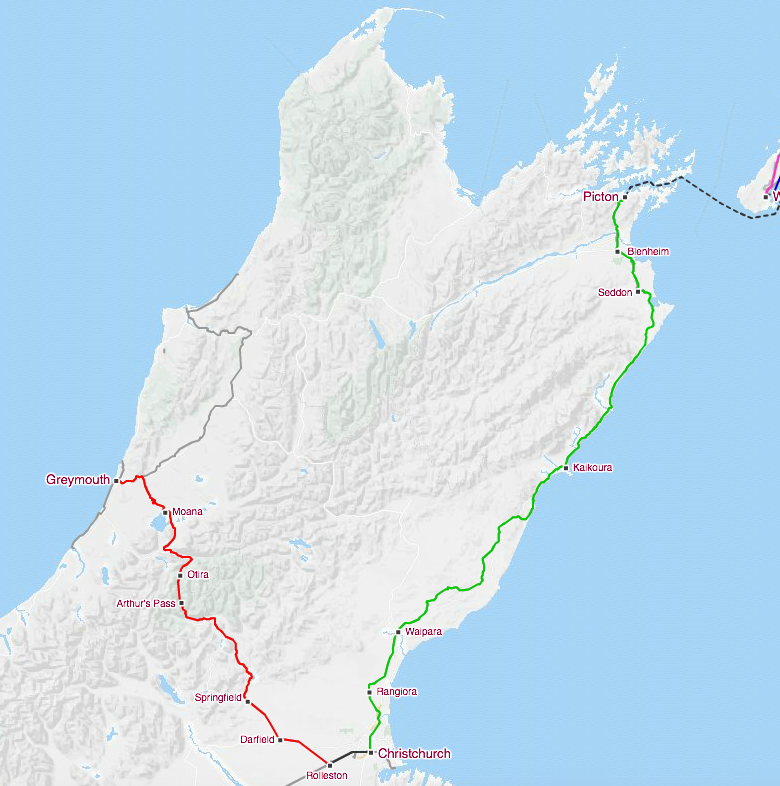 The journey offers spectacular views of the Southern Alps, and of the striated rivers that cut through the mountains.

The train winds its way up to its highest point at Arthur’s Pass, 737m above sea level and VERY windswept.

While it may be windswept, at least it was dry while we were there. That can’t be said of a couple of other settlements that we passed through. I’m reluctant to call them towns as they are really only a few houses clustered round the railway line with the occasional outlying farm. The on-board commentary that the annual rainfall in some of these places is over 5 metres. That’s five times more rain than Glasgow. By any reckoning, that’s a lot of rain.

Eventually, we descended into Greymouth where we had booked a rental car. Having witnessed the volume of bags that had been loaded onto the train in the morning, my guess was that most people would be leaving the train here and not taking the return journey. I deduced that this would also mean that most people would be picking up rental cars at the station, so devised a plan that allowed the ladies to go and pick up the bags (like a true renaissance man) while the gents rushed to the rental counter to beat the crowds, show our licenses, and be the designated drivers for the rest of the trip (slightly less renaissance man).

Anyway, it worked. We were first at the Thrifty counter to pick up our Toyota Rav4 and by the time we had finished, the queue behind us snaked out of the station building and back along the platform.

We skipped off gleefully to assist the ladies with the bags then loaded the car. Our first stop on the road trip was south in Hokitika, but we had decided to head north to see the pancake rocks. Although it’s my first time in NZ, all three of my travelling companions know it to a greater or lesser extent. Ishbel spent some time here nearly 40 years ago visiting her sister, who lived here for over 12 years and married a New Zealander. There was a lot of local knowledge for me to tap into, which was hugely helpful in defining our itinerary.

We drove out of Greymouth in the rain, and arrived at Punakaiki in the rain. It was wet today. The pancake rocks are an interesting limestone formation that it would have been delightful spending some time at. If it were drier. 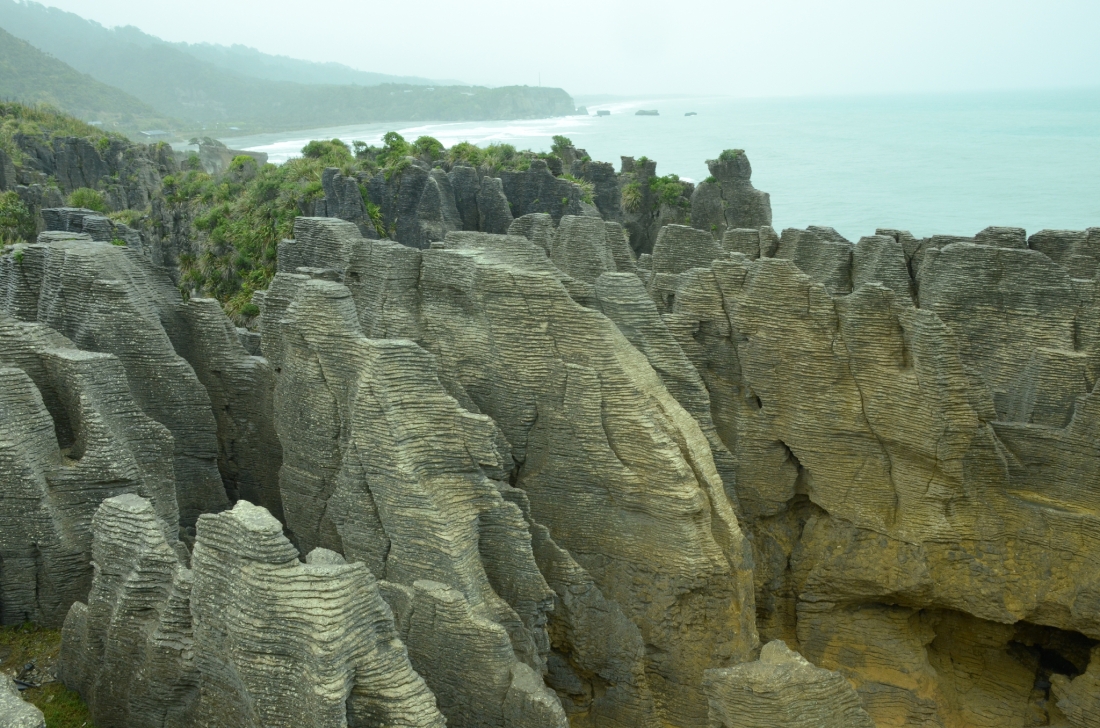 After the pancake rocks, we set off south, back through Greymouth and onward to Hokitika. As we drove, the cloud lifted and the sun started to push through. It was sunny again.

By the time we arrived in Hokitika, the sun was shining and it was getting warm. We had a brief stroll around town and did a quick grocery shopping for essential supplies and dinner, then headed out to our AirBnB. This turned out to be a lovely place on the riverbank. 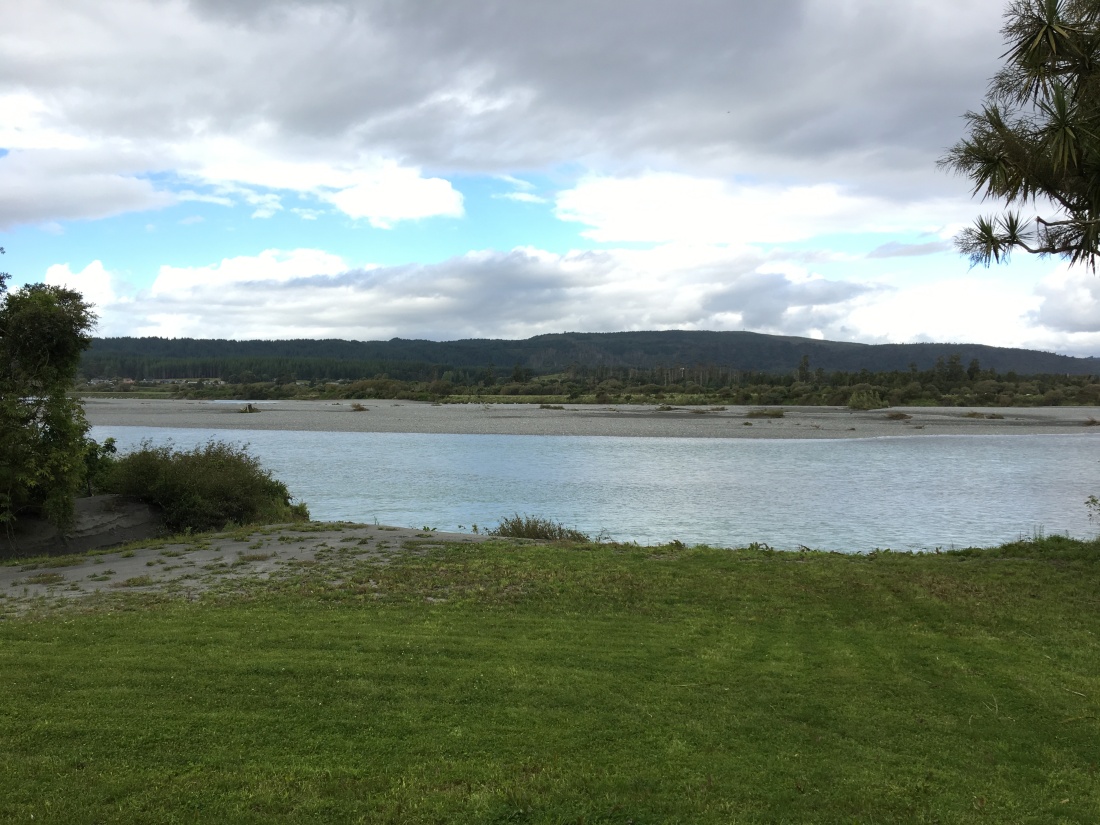 Also, our host had left us 8 eggs laid by his hens, fresh grapes grown in his garden, and a still warm loaf of home-baked bread. So often, it’s the little things that make a difference.