Saturday dawned sunny in Cairns. We had decided to travel on the Kuranda Scenic Railway on Sunday, leaving Saturday free for a visit to Port Douglas. First, though, we met one of our fellow dive students, Ellen, for breakfast at a little cafe called Che Zest. All three of us ordered Eggs Benedict with smoked salmon. We had been (inadvertently) drinking salt water for the past three days solid, and I guess we were missing the taste of the sea. After breakfast, we said goodbye to Ellen and headed back to the hotel, the IBIS Styles. We rented a car from the Budget office attached to the hotel for AUD 60 for the day. There are cheaper places around but as the temperature hit 30°C, the convenience outweighed the price for me. Port Douglas is around 70km north of Cairns and the road between the two is reminiscent of the winding coastal road that we took from Cape Town to Hermanus back in December.

As we glided along the road in our little Suzuki Swift, we enjoyed regular, stunning views of the coastline ahead and behind us.

As we drove along, I entered a little reverie around the history of British colonialism. The fact that I was travelling between two towns with Scottish derived names led me to ponder the influence Scots must have had on Britain during its colonial heyday. There are Scottish names all over Australia, but this was also the case in Hong Kong. And South Africa. It struck me forcefully that Scots were very much part of the history of Empire – both for good and ill. Hence the title of this post: another Burns reference. It’s amazing what can go through your head when you’re supposed to be concentrating on driving in a foreign country.

Despite this, we made it safely to Port Douglas and stopped first at the viewpoint overlooking the town, where we witnessed what appeared to be the inauguration of a new colony of tree ants. The queen (pictured below) was travelling along the railing at the viewpoint followed by a number of much smaller workers. 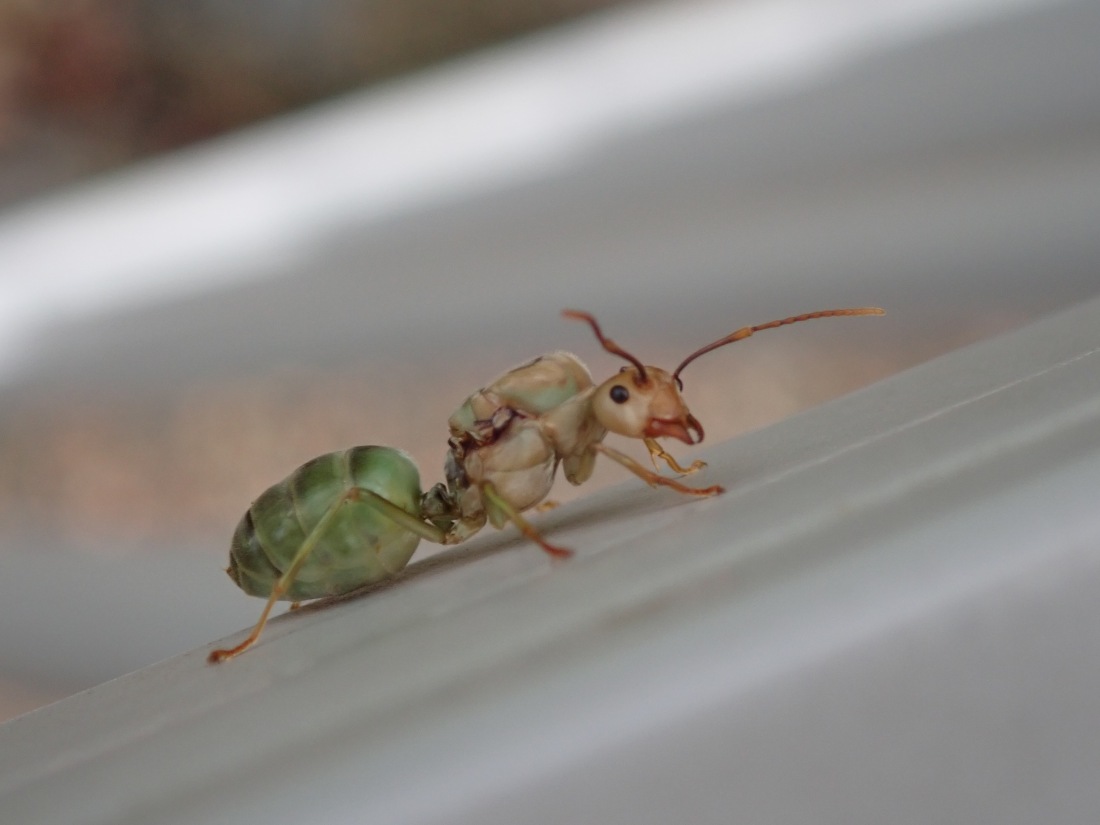 We then drove into the centre and enjoyed a fruity mocktail at a pleasant little cafe, whose name now escapes me. The temperature had risen significantly since we were last on shore earlier in the week and it was oppressive to walk around. I had opted for a cotton shirt today, which was to prove a schoolboy error. We walked from the cafe out to the historic lighthouse, which is hidden down a narrow, shaded path between two houses. We successfully sought it out and discovered it to be historic but not necessarily enthralling.

After the lighthouse, we strolled back along the shady path and back towards town. Then I discovered that my cotton shirt was no match for the local mosquitoes’ mandibles. I had acquired three bites on my upper right arm which started to itch furiously. Luckily, one of the first shops on the main street was a chemist where I was able to acquire insect repellent and itch easing cream. I’m not in the habit of publicly exposing my flesh but the irritation was so extreme that I had no hesitation in stripping off my shirt and asking nurse Ishbel to minister to my puncture wounds. Relief was instant, as promised by the packaging. I immediately put the shirt back on and we both liberally applied repellent to all exposed flesh and any possible point of ingress. I am generally a mosquito magnet and Ishbel need not worry about bites when she’s with me as I appear to be a preferred food provider for mosquitos the world over. But once I’ve sprayed, she needs to as well. When visiting the quaint towns of Northern Queensland, it’s easy to forget that these are mere pinpricks of development in a vast swathe of tropical rainforest. Don’t wear cotton shirts in the jungle.

Now safely armoured, we headed back to the car and drove through the town to the car park by the beach. We wanted a stroll along the beach and this seemed a nice spot. There was an area netted off for swimmers and lifeguards patrolling. There was also a warning that marine stingers were active, so we decided not to dip our toes. 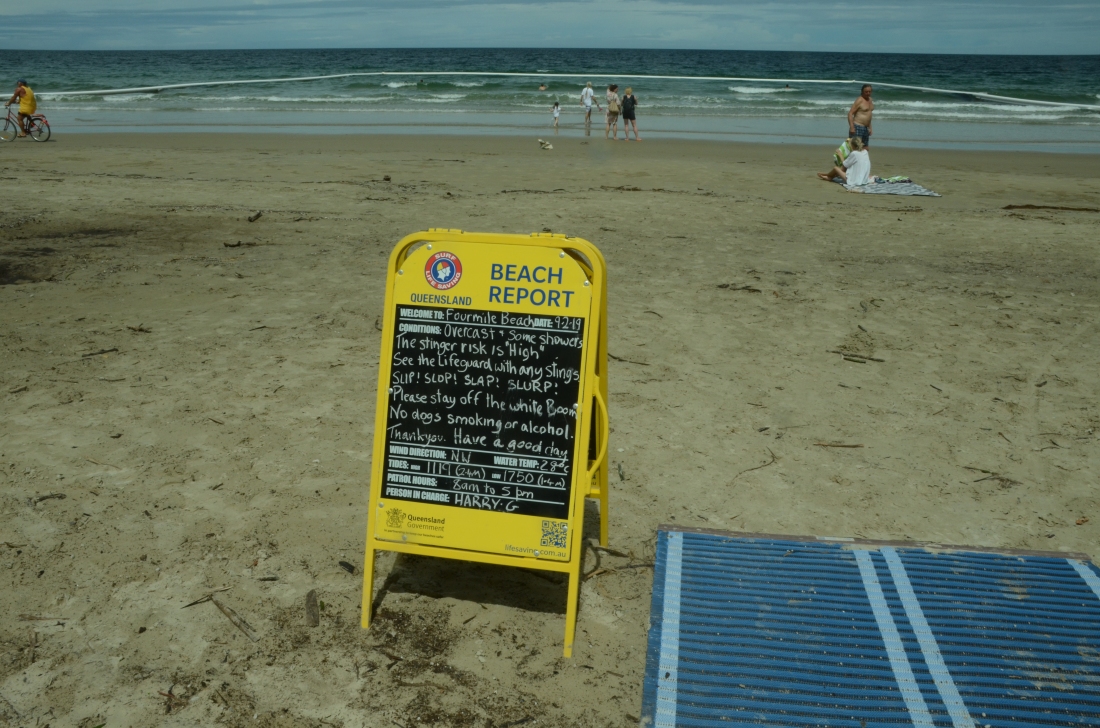 I had already experienced stingers the previous week when we had a swim near Surfers Paradise. My heels and top of my foot suffered at the hands…tentacles…of small stingers known locally as bluebottles. These menacing little creatures are not actually jellyfish but siphonophores, related to the Portuguese man o’ war although smaller and less venomous. The pain lasted about an hour and there were no ongoing ill effects but I was in no hurry to repeat the experience.

After a shortish walk enjoying the sea breeze, we turned and headed back towards the car park. That was when we spotted the osprey circling above and, eventually, witnessed it diving into the sea and emerging with a fish. 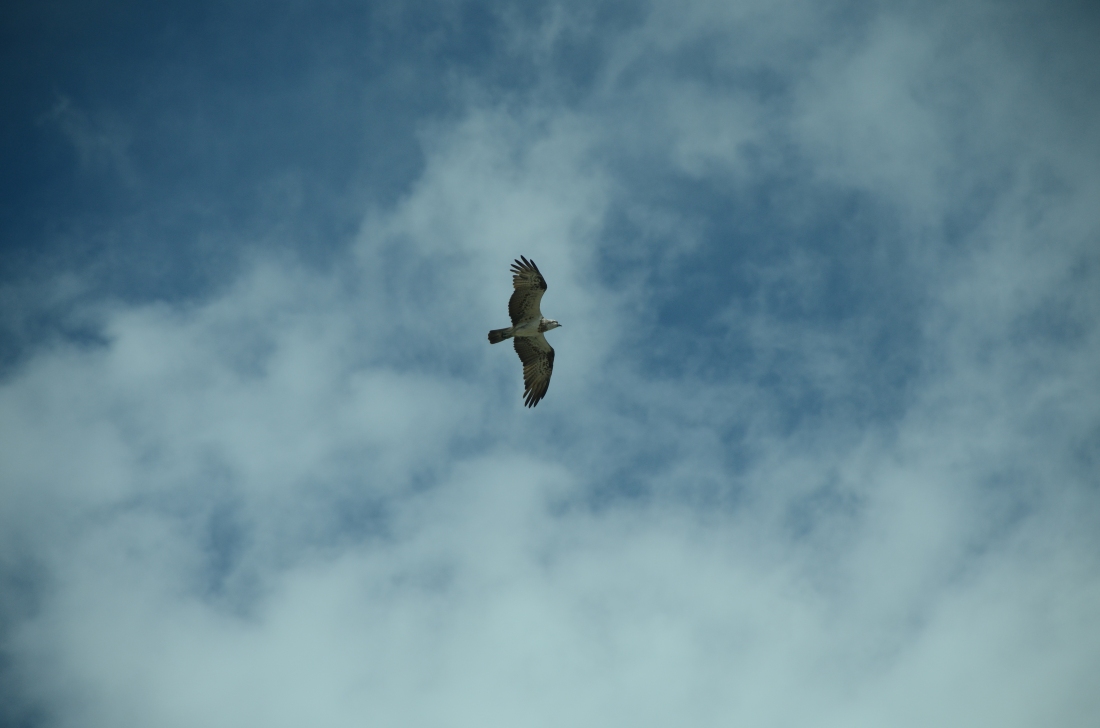 Ospreys are so rare in Scotland that we were hugely excited to get an opportunity to see this, even though they’re ten a penny in Australia. This was a pleasant way to finish off our Port Douglas visit so we headed back to the car and pointed ourselves towards Cairns.

As we approached the city, we decided to stop off for what is fast becoming a tradition on this trip: a visit to the Botanic Gardens. After the vast acreage of the gardens of Cape Town, Johannesburg and Brisbane, it was a nice change to stroll through Cairns’ considerably smaller version. It did, however, offer us one of the most appropriately named plants I have ever seen:

the Beefsteak Heliconia. It’s not an Australian native, but it’s quite a striking plant.

After the Botanics, we drove back to Cairns and had an early dinner, before calling it a night.